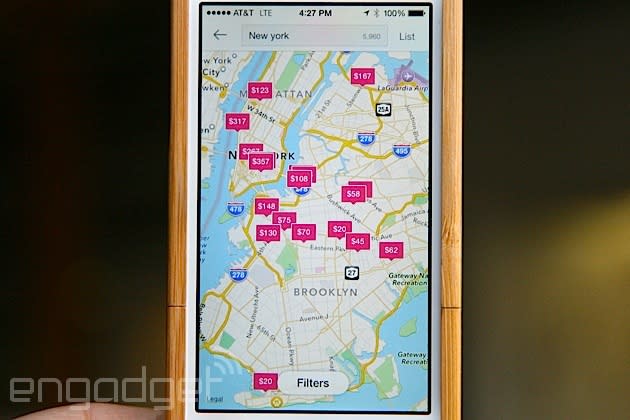 Airbnb is clearly tired of getting grief from cities that say its customers' short-term rentals are frequently illegal or otherwise a drain on the community. The company has revealed that it's in the midst of removing more than 2,000 New York City listings that aren't "providing a quality, local experience to guests." While Airbnb hasn't said exactly what that means, the move comes as the state Attorney General filed an affidavit in support of a subpoena for Airbnb customer info. The filing claims that two thirds of NYC rentals break the law by subletting an entire apartment without the official tenants being present, and it named and shamed 17 hosts that are allegedly the biggest abusers.

Just what's driving the delistings depends on who you ask. Airbnb tells Business Insider that it had been planning the action for "months." On its blog, the company added that all of the hosts on the affidavit list have been banned; it accuses the Attorney General's office of trying to "distract" from the invasiveness of the subpoena. The Attorney General, meanwhile, rejects the claims. He argues that Airbnb is trying to "confuse the issue" by waging a public relations war instead of cooperating with authorities.

Whether or not you believe the spin from either side, the delisting may discourage crimes beyond just property violations. As the New York Post notes, some Airbnb renters in NYC have been setting up temporary brothels and illegal hotels. It's doubtful that the crackdown will completely eliminate these kinds of rentals, but they might be harder to arrange in the future.

In this article: affidavit, airbnb, apartment, internet, newyork, newyorkcity, nyc, rental, rentals, sublet, subpoena
All products recommended by Engadget are selected by our editorial team, independent of our parent company. Some of our stories include affiliate links. If you buy something through one of these links, we may earn an affiliate commission.