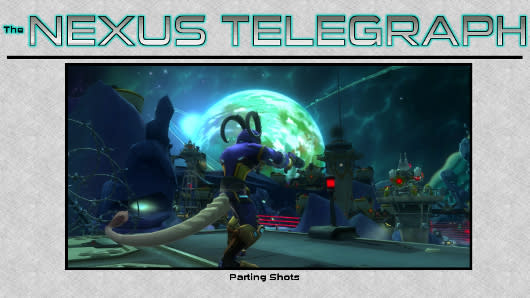 My performance on the dance floor during PAX East 2013's WildStar party is the stuff of dark legends (in my mind, anyway), but it was not replicated this year. Indeed, when I tried to get into this year's WildStar community party, the entranceway was inaccessible due to the sheer mass of people. As I naturally handle crowds about as well as a Mechari handles knock-knock jokes, I opted to turn around and go back to my hotel room.

There was a Ghostbusters marathon on, so it was still kind of awesome.

This did not, however, mean that the convention was devoid of interesting stories; it just was devoid of stories in which I sustained injuries greatly impacting my normal hiking routes. So let's talk about what things really stuck out in my mind through the whole con. For my money, that comes down to the focus on the endgame and a really stupid statement. Where to start?

Let me make something clear: I like Jeremy Gaffney. He's easily my second-favorite producer in the industry right now because my affection for Naoki Yoshida is well-documented and he has to get the top nod. (Dude runs on red meat, cigarettes, and coffee. I think if I said otherwise he'd be coming for my femurs.) When I criticize, it comes from a position of affection.

That being said, when I interviewed Gaffney regarding the state of the endgame raiding, he gave an answer that struck me as one of the worst I have ever heard. In not so many words, his response to people who don't want to raid ever is that raiding will get easier over time, so it's all right.

This is the point when I want to just smack my head against a table several times and start screaming, "No! Wrong! Totally wrong! Everything you just said is wrong! You know it's wrong; why did you say that?!"

So much of what the game seems to be doing right now is clearly done with an eye toward what people actually want to do in the game, but locking the best and coolest and most desirable gear behind a raid wall is something that has been done in this industry for far too damn long. If you wanted to be locked out of getting gear unless you go into raids, you can go into World of Warcraft. Except at least there the gear is locked behind raids that you can casually walk into, thus giving you at least reasonable odds of picking it up eventually. You're not in a high-stress environment.

Yes, I know, you can buy this gear with Elder Gems once you get the boss down, but that is not the point. You are still using the same gating mechanism that is geared toward an incredibly small percentage of players, rather than literally anything else. Saying "you don't need that gear if you don't raid" is an inherently ridiculous statement, one borne out of an elitism that I would really hope the community as a whole would have grown out of by now.

My hope here -- and why I'm listing this first -- is that I'm hoping the team is clever enough to keep a close eye on how many people are raiding and adjust plans accordingly. But saying "the content will get easier over time" is the opposite of addressing the fact that some people, including me, do not want to raid. At all. Ever. Period. Locking all of the best stuff behind that wall sends the message that non-raiders are second-class citizens, and how long are people going to stick around to voluntarily be second-class citizens?

The focus on the endgame

Honestly, seeing a bunch of stuff about endgame on display doesn't bother me. You're going to hit the level cap at some point; the game needs to provide you with plenty of stuff to do up to that point and plenty to do at that point. Yes, you could have a game without levels, but you're still going to wind up at an apex even then. The idea that something has to be done at the end of your leveling experience is one that's worth considering.

Personally, I see the focus as being largely about giving people a reason to keep playing and seeing what's around the bend, which is an issue that MMOs always have to address. It's somewhere between the Guild Wars 2 approach of "what endgame?" and the usual revolving door of new raid content experienced by a tiny fraction of the playerbase; the fact that the first priority is solo content (i.e., the stuff that people consume right away) gives me hope for the team and the future.

What WildStar has to deal with is the reality that people are going to reach the level cap reasonably quickly, and while I might not agree with all of the methods being used to provide something to do at the end, I do appreciate the fact that it's being attended to from the start. Focusing on it is a natural outgrowth of that reality, since you're going to spend most of your time there.

You can also look at it as an extension of just cycling through different things that need addressing, going from a heavy focus on things like housing and crafting to a heavy emphasis on what you'll be doing other than building houses and swords. Post-launch will make it clear how robust the game's actual crafting setup and economy turn out to be, but there does appear to be the necessary emphasis on keeping people engaged and playing. I'm hopeful.

As always, feedback is welcome in the comments below or via mail to eliot@massively.com. Next time around, I'd like to talk about what feels like the biggest upsides and letdowns of the game as we're approaching launch.

Here's how it is: The world of Nexus can be a dangerous place for a tourist or a resident. If you're going to venture into WildStar, you want to be prepared. That's why Eliot Lefebvre brings you a shiny new installment of The Nexus Telegraph every other Monday, giving you a good idea of what to expect from both the people and the environment. Keep your eyes peeled, and we'll get you where you need to go.

In this article: carbine, carbine-studios, column, con, convention, design, endgame, endgame-design, event, event-coverage, events, expo, featured, future, interviews, jeremy-gaffney, massively-event-coverage, ncsoft, nexus, nexus-telegraph, opinion, pax, pax-2014, pax-east, pax-east-2014, penny-arcade-expo, sandpark, sci-fantasy, sci-fi, statements, the-nexus-telegraph, wildstar
All products recommended by Engadget are selected by our editorial team, independent of our parent company. Some of our stories include affiliate links. If you buy something through one of these links, we may earn an affiliate commission.