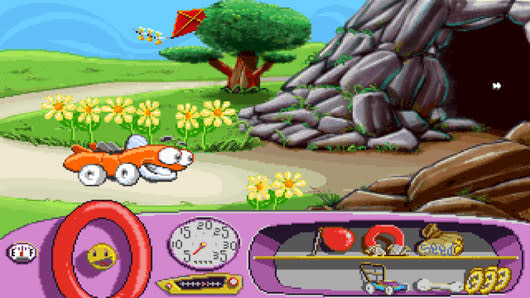 Putt-Putt Joins the Parade, Spy Fox in: Dry Cereal and other classic children's adventure games from publisher Humongous Entertainment are now available via Steam as part of a new partnership with Tommo and retrogame restoration group Night Dive Studios.

Co-founded by The Secret of Monkey Island creator Ron Gilbert, Humongous Entertainment produced dozens of kid-oriented point-and-click adventure games for PC platforms throughout the 1990s and early 2000s. Other Humongous Entertainment games making their Steam debut this week include Freddi Fish and The Case of the Missing Kelp Seeds, Pajama Sam: No Need to Hide When It's Dark Outside, Putt-Putt and Pep's Balloon-o-Rama, and Freddi Fish and Luther's Maze Madness.

Tommo plans to launch Steam versions of many more games from Humongous Entertainment's back catalog in the coming weeks, including Putt-Putt Goes to the Moon, Pajama Sam 3: You Are What You Eat from Your Head to Your Feet, Spy Fox 3: Operation Ozone, and Putt-Putt Travels through Time.

All of this week's featured games are available for 50 percent off through April 24. Steam is also offering a Humongous Entertainment Complete Pack, which grants early access to all 27 games in the collection for $99.99.

[Image: Humongous Entertainment]
In this article: humongous-entertainment, linux, mac, night-dive-studios, pajama-sam, pc, putt-putt, spy-fox, steam, tommo
All products recommended by Engadget are selected by our editorial team, independent of our parent company. Some of our stories include affiliate links. If you buy something through one of these links, we may earn an affiliate commission.