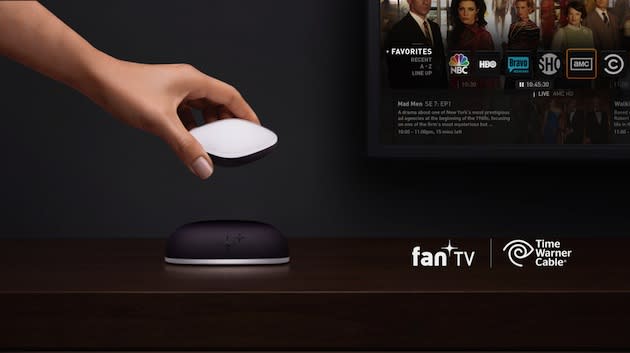 Last summer Fanhattan showed off its Fan TV box that promised to put cable TV on the same level as internet streaming services, but with the odd twist that cable TV providers would be the ones to sell it. After a short test period with Cox Cable last year, Fanhattan has formed a partnership with Time Warner Cable to sell the $99 boxes to its subscribers (available for pre-order now, shipping in the next few months). It doesn't need coax or a visit from the cable guy, but it will have live TV and video on-demand from TWC, plus streaming video from services including Redbox Instant, Target Ticket (coming shortly after launch), Crackle and Rhapsody. Time Warner Cable has been on the forefront of transitioning to internet streaming with its TWC TV apps, and the Fan TV box plays directly into that.

So far big hitters like Netflix, Amazon, Vudu, Pandora, HBO Go, or Rdio aren't on the list, although there are plans to add more services "over time." The only charge for the box is the initial (limited time pre-order) $99 price, with no contracts or extra fees beyond TV and internet service. So far the app list isn't exactly striking fear into Roku, Apple TV or even Fire TV, but the addition of cable TV feeds brings a lot of content those boxes don't necessarily have, without the drawbacks of slow cable boxes that aren't built for internet services.

We do wonder what will happen to the partnership when/if that TWC-Comcast merger is completed, particularly since Comcast has an internet-integrated platform of its own with X1. For now however, it's just an interesting option for Time Warner Cable subscribers who need a box in another room and don't want to pay a rental fee.

In this article: fanhattan, fantv, hdpostcross, redboxinstant, streaming, TimeWarnerCable, video
All products recommended by Engadget are selected by our editorial team, independent of our parent company. Some of our stories include affiliate links. If you buy something through one of these links, we may earn an affiliate commission.