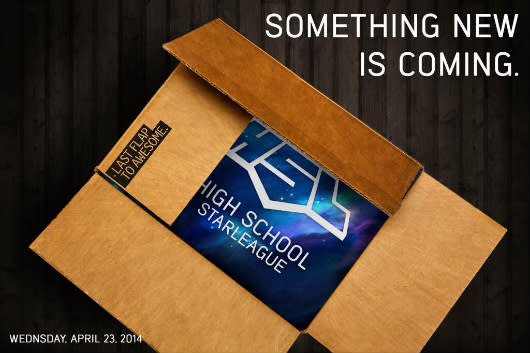 "Through tournaments and scholarships, we plan to prepare our aspiring and talented gamers for the professional gaming scene, while simultaneously ensuring success in their education and character development outside of the game," High School StarLeague COO Jesse Wang said in a press release.

Twitch and Newegg's significant contributions to $20,000+ scholarship pool will help bring esports and academics to high schools across North America.

Los Angeles, CA - April 23, 2014 - High School Starleague (HSL), North America's premier esports organization for high schools, today announced their next step in proliferating and legitimizing esports at the high school level. With the financial support from Twitch, Newegg and other companies, the top talent in this season's HSL League system will be competing for over $20,000 in college scholarships. This is a prize pool unheard of for the high school level of play, and a testament to HSL's core mission of empowering the next generation of high school talent.

"With these scholarships, the HSL will usher in a new era of esports where excelling in cyber-athletics will be as respected as excelling in traditional sports," said Tomber Su, CEO of High School Starleague.

"Through tournaments and scholarships, we plan to prepare our aspiring and talented gamers for the professional gaming scene, while simultaneously ensuring success in their education and character development outside of the game," added Jesse Wang, COO.

HSL will be holding its finals for the 2013-2014 season this June in Southern California. These events will be live broadcast on Twitch, the world's leading video platform and community for gamers, at www.twitch.tv/hsstarleague. Twitch is also contributing $10,000 toward the scholarship.

"Twitch and their team have been invaluable in assisting HSL in its mission to bring esports to schools," according to Su. "Twitch's platform not only makes is easy to watch pro players, but students of all skill levels can share their gameplay experience with their peers. Without Twitch, we would not have been able to broadcast our players' games, while their financial contribution has almost doubled our scholarship offering."

Newegg, the leading electronics e-tailer, will also be supporting the event by contributing $10,000 to the scholarship fund.

"Almost every high school gamer, including myself when I was 16, will at some point custom-build or purchase their own higher-end computer to take their competition to the next level," said Wang. "I am grateful that companies like Newegg provide the services necessary for students to be able to customize and purchase their computers with ease. We greatly appreciate their generous contribution."

- Diverse Player base: With over 750 schools representing 46 States and 8 Provinces in HSL this year, HSL constitutes as one of the largest tournaments in the world.

- Rapid Growth: In the past year alone, HSL has seen an enormous amount of community support, allowing it to grow from around 500 players to nearly 4000 players, with many more expected to participate in future events.

- Academic Merit: Players in the HSL are not only are accomplished gamers, they are strong students. Over 50 teams represent schools on US News and World Report's ranking of top 200 high schools, and the average weighted GPA of players is 4.1

- Proven Talent: Many former HSL players and staff are now making a career in eSports, including:
· Nicholas "Gleebglarbu" Haddad plays Support for Cloud9 Tempest
· Max "Astrea" Angel plays Protoss for ROOT Gaming
· Libo "Xenocider" Chang plays Terran for Evil Genius
· Aidan "Zirene" Moon casts professionally for Riot Games
In this article: esports, high-school-starleague, Newegg, pc, scholarship, scholarships, twitch
All products recommended by Engadget are selected by our editorial team, independent of our parent company. Some of our stories include affiliate links. If you buy something through one of these links, we may earn an affiliate commission.