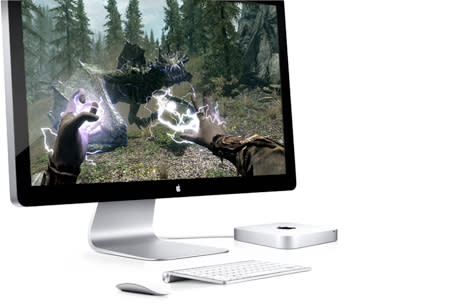 I'm a gamer who doesn't like compromises. I have a gaming PC that runs Windows, but I also have a few Macs around my house as well, and the fact that most PC games found on Steam are Windows-exclusive is a huge bummer. Play it on a Mac is a new weekly series that will offer puzzled Mac gamers the answers they're looking for.

There are three main avenues to investigate when trying to get a Windows program running on OS X: Boot Camp, Parallels, and Crossover. Each method has its own nuances that can affect the performance of individual apps, and games are no different. Because of this, knowing whether or not a Windows-compatible game is even worth the trouble to install on your Mac is nearly impossible. So I'll test them all, and here's how.

To offer the most realistic experience for the widest range of Mac users, the test system is modest in terms of power:

If I can get a game running with playable performance on this machine, there's a good chance it'll run on most Macs built within the last couple of years, and many more capable older machines as well.

CrossOver is the most lightweight solution for running Windows programs on OS X, allowing you to the applications in a more standalone manner than the alternatives. However, compatibility is a huge issue here, and whether an application (or game, in this case) is supported is a tossup. I'll give you the latest CrossOver details on each game I test.

You can download a free trial of CrossOver 13 and purchase the full program from the official website.

Parallels installs a virtual machine on your Mac, effectively conjuring a Windows PC inside your Mac using what I can only assume is a combination of black magic and human sacrifices. Compatibility usually isn't an issue here, but the amount of resources you dedicate to your virtual machine can have a big impact on how a game responds. I'll help you hit the right balance.

You can download a free trial of Parallels 9 and purchase the full program from the official website.

Boot Camp turns your Mac into a Windows computer using officially supported software. Boot Camp offers the most faithful Windows experience, but you need to boot straight into Windows and leave OS X temporarily behind. This can be a pain for multitaskers, and there's also the possibility that games perform no better here than in CrossOver or Parallels. I'll clear this up for each game I cover.

You can find out more about Boot Camp and view tutorials on Apple's Boot Camp page.

Each article will wrap up with a verdict and the overall outcome, so you can decide whether any of the available options is worth your time and money.

If you have any suggestions for games to cover, questions about the process, or other input, feel free to nudge me directly on Twitter.

In this article: boot camp, crossover, gaming, parallels, pc games, play it on a mac, windows
All products recommended by Engadget are selected by our editorial team, independent of our parent company. Some of our stories include affiliate links. If you buy something through one of these links, we may earn an affiliate commission.