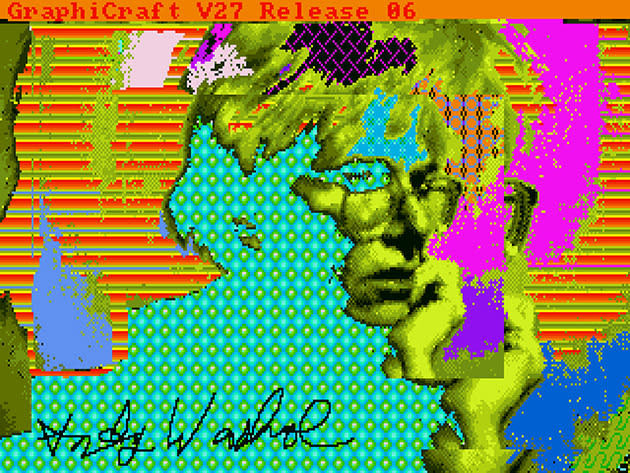 Rediscovered artwork like a napkin Picasso or unearthed Matisse can be identified on sight, but pieces crafted in the digital age by pop-artist extraordinaire Andy Warhol and encoded in an outdated format are far more difficult to ascertain. In fact, it took the retro know-how of Carnegie Mellon University's Computer Club and a team of artists, archivists and curators to wrangle some of Warhol's lost pixels into the physical world. The retrieval process was documented by a video crew from the Carnegie Museum of Art (CMOA) and will be premiering as Trapped: Andy Warhol's Amiga Experiments on May 10th at the museum. This is the second film produced by the CMOA's Hillman Photography Initiative for a five-part series entitled The Invisible Photograph, which explores the hidden side of photography. It's all about rediscovering art that has been stashed away, forgotten or nearly destroyed.

This particular batch of lost Warhol works was created on an Amiga 1000. He began working with the computer in 1985 as part of a live event touting its multimedia capabilities. The demo involved Andy sitting down at the Amiga, then capturing and retouching a digital photo of '80s pop-punk star Debbie Harry, who joined him on stage. That particular image has been on display at the Andy Warhol Museum (AWM), but the rest of Warhol's fledgling computer-based art from that time was spread across 41 floppies and remained unseen for decades.

The obsolete disks have been in storage at the AWM's archive and it wasn't until artist Cory Arcangel saw footage of the event on YouTube that he was spurred into action. Along with the help of the CMU Computer Club's vintage expertise and senior members from both museums, they set out to exhume and revive Warhol's old digital files. This project provides a window into the artist's unique vision as translated through tools like Amiga's ProPaint and GraphiCraft, and highlights the technical hacks used to extract data from dead digital formats.

The May 10th premiere of Trapped: Andy Warhol's Amiga Experiments is at Pittsburgh's Carnegie Museum of Art, but if you're not in the neighborhood you can check out the documentary on its website starting May 12th.

In this article: 80s, 80s computing, amiga, amiga 1000, andy warhol, carnegie mellon university, carnegie mellon university computer club, cory arcangel, debbie harry, graphicraft, hillman photography initiative, pop art, propaint, warhol
All products recommended by Engadget are selected by our editorial team, independent of our parent company. Some of our stories include affiliate links. If you buy something through one of these links, we may earn an affiliate commission.