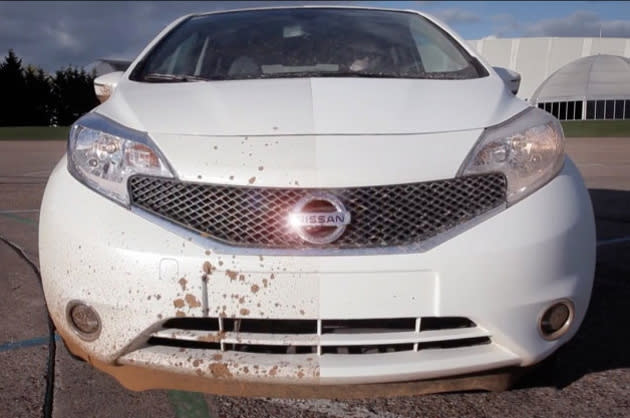 For some people, washing the car is a calming pastime that induces feelings of satisfaction and fresh beginnings. For everyone else, there's this: Super-hydrophobic and aleophobic paint, which repels water and some oil-based liquids, and which Nissan is currently trialing on one of its cars in Europe. The video below shows what happened to a car that was taken for a messy drive with half of the body coated with the new stuff ("Ultra-Ever Dry") and the other half with regular Dulux (or whatever it is they use these days). The results speak for themselves, but they don't say anything about how long this self-cleaning ability actually lasts. In industrial applications, where a version of the paint is already being used, it's easily rubbed off and rarely survives longer than a year. Nevertheless, Nissan says it's evaluating Ultra-Ever Dry's viability and hopes to offer it as an aftermarket option on a future model -- at which point it might also make sense to splash out on a self-cleaning windshield, headlights, dash system, and door handles.

In this article: carwash, hydrophobic, nissan, paint, self-cleaning, transportation, video
All products recommended by Engadget are selected by our editorial team, independent of our parent company. Some of our stories include affiliate links. If you buy something through one of these links, we may earn an affiliate commission.