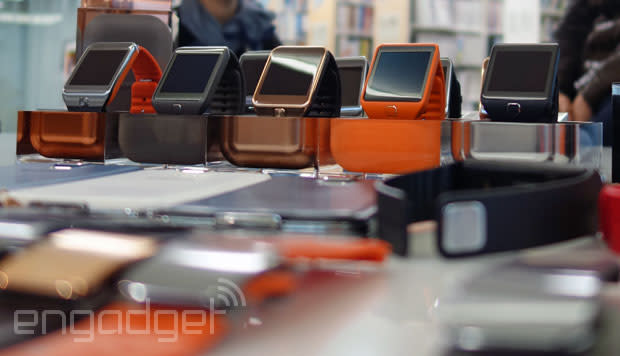 With countless (well, a lot of) Gear 2 watch straps and just under eight wearables -- a mix of Gear 2s, Gear 2 Neos and Gear Fits -- on the table in front of us during our interview with Samsung designers, the impression is that the company taking its wearables very seriously. There were just six months between it announcing the original Galaxy Gear and its sequel; that's a pretty short lifespan.

To make matters more... interesting, Android announced its own wearable platform, months after Samsung's Gear announcements. (For those not keeping notes, these Gears run on Tizen, a new mobile OS that hasn't yet appeared on a mobile.) Min Cho, Samsung's marketing director, explained that its wearables wouldn't be limited to the green OS. "We'll continue to work on the best solutions for our customers, including collaborating with Google and Android," he says. He slows his voice and looks at me: "We are working on it." Samsung already confirmed that it's got plans for Android Wear, but what about the current crop of wearables? What did Samsung learn after half a year of the Galaxy Gear?

"After the first Gear, the most important lesson learned was that Gear should be a fashion accessory. It must meet the fashion needs of users," explains Eunjoo Kim, principal UX designer for the Gear series. She adds later: "One size doesn't fit all." This meant more personalization in the second generation, and not just when it comes to product options. The philosophy here is different than the one we hear about the Galaxy S5: Cho told us, independently, that the GS5 is definitely a phone for "everyone."

"One size doesn't fit all."

We covered the physical differences between the Galaxy Gear, and Gear 2 in our review, but Jun Yong Song, senior hardware designer for both smartwatches, tries to offer up a little more context: "Since the first Gear was designed with straps attached, it retains a solid line [that] creates a classic, holistic design. The Gear 2 has been designed to match any strap ... to blend smoothly to whichever one is used." In the process, those odd screw fittings were also banished, while softer materials were used compared to the original Gear "for greater comfort," adds Song -- well, it is a wearable. Otherwise, the core hardware design really hasn't changed in any dramatic way, just evolutionary improvements. Changeable straps, a variety of background colors, wallpapers (finally) and clock designs, however, do at least give credibility to this notion of a more personal wearable. Tinkering with design (at least as far as icon layout and wallpapers are concerned) can now be done from the watch itself, and it's not just about choosing pretty images. "The default wallpaper [is made] to show the benefits and features of AMOLED display." Kim says. "It can express [colors] that TFT LCDs cannot. Like these fluorescent greens and blues." It's something she eagerly demonstrates with a Galaxy Fit. "On TFTs, they become really obscure". She also adds: "In the case of Gear smartwatches, because of the changeable straps, there was a need for daily changes [to the look of the device]."

If you thought it uncharacteristic for Samsung to settle on a form factor so easily, you'd be right.

Customization is one thing, but why (at least compared to the incoming competition) does the Gear stick to the relative-of-smartphone squarish face? "Consumers have different tastes and values. With [three devices], we are giving users the power to choose what they need and want to have," says Song. So three equals the right amount of choice? The team previously mentioned that, as a fashion accessory, one size doesn't fit all. How, then, are these three products expected to deliver to everyone?

"Three is the magic number!" Kim kids, but with both Gear smartwatches and the Gear Fit, the team ran through various size and design prototypes -- with the eventual products being deemed the optimal combination. If you thought it uncharacteristic for Samsung to settle on a form factor so easily, you'd be right. "For the Gear and Gear Fit, the size was an issue for a long time," Kim says. "We have two sizes now, but we are open to many other possibilities, too." (Past form indicates this is probably very true.) The Gear Fit is a whole different beast, however. It's unusual design was apparently inspired by the sun rising over the ocean (there's a hint in the early sketches, if you really stare), combined with real-world ergonomics. The team attempted to factor in gender and age at the design stage, and this lead to what it reckons is the "optimal display size and form for the content" -- as well as the current curve and length of the strap. The OS here, however, is still Tizen. That means it has the same limited selection of apps and features, but it's not as if another Android-powered wearable would fare any better at this precise stage. Half a year later, and the original Galaxy Gear still has an app-supply problem.

The big question here is why Samsung jumped to Tizen, but it's hard to get a definitive answer to the reasoning there. Cho talks around the question: "It's complicated. If you take a closer look at Tizen, it's web-based; that offers a degree of efficiency in converting existing apps ... But you are going to see more efforts with more devices -- including Android." There it is again. The company might have learned a few things from its first smartwatch, but it feels like it's a case where more study is needed.

Samsung's betting on the demand for wearables to come (it's not the only one), but it's a hedged bet. Tizen? Android? Health device? Smartwatch? And now that Samsung says it's happening, what will its interpretation of Android Wear look like? Because that's honestly what we're more excited about. Will it be a Gear with a personality transplant, or something more "Whoa"? We're hoping for the latter.

In this article: design, exclusive, fitness, galaxy, galaxygear, gear, gear2, gearfit, gearneo, mobilepostcross, samsung
All products recommended by Engadget are selected by our editorial team, independent of our parent company. Some of our stories include affiliate links. If you buy something through one of these links, we may earn an affiliate commission.