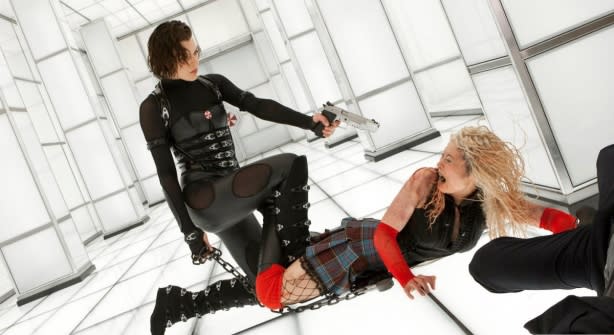 The Resident Evil movies are one of the most successful games-to-film adaptations out there - financially, anyway. Critically, well ... maybe not so much. And yet, like the undead it portrays on the big screen, the series keeps shuffling along, undeterred. China Central Television (CCTV) reports that director Paul W.S. Anderson will begin work on the sixth installment this year.

Anderson discussed the film at the Beijing International Film Festival, which included plans to once again cast Chinese actress Li Bingbing as Ada Wong. CCTV reports that Anderson said he would "have to go home ... for 'Rising Resident Evil,'" but this appears to be a mistranslation. A clip from Anderson's talk reveals that he said "writing," not "Rising."

It was reported last year that the as-of-yet-unnamed sequel would release in September of this year, but if Anderson is just now starting to pen the script, that seems about as likely as surviving a Licker encounter with no Green Herbs and a Combat Knife. Are we right? Eh? Eh? This guy, he gets it.

Resident Evil: Retribution, the most recent entry, reportedly cost $65 million to produce and earned $221 million.
[Image: Screen Gems]
In this article: capcom, movies, paul-ws-anderson, resident-evil, resident-evil-movie, screen-gems, theyre-really-making-another-one
All products recommended by Engadget are selected by our editorial team, independent of our parent company. Some of our stories include affiliate links. If you buy something through one of these links, we may earn an affiliate commission.