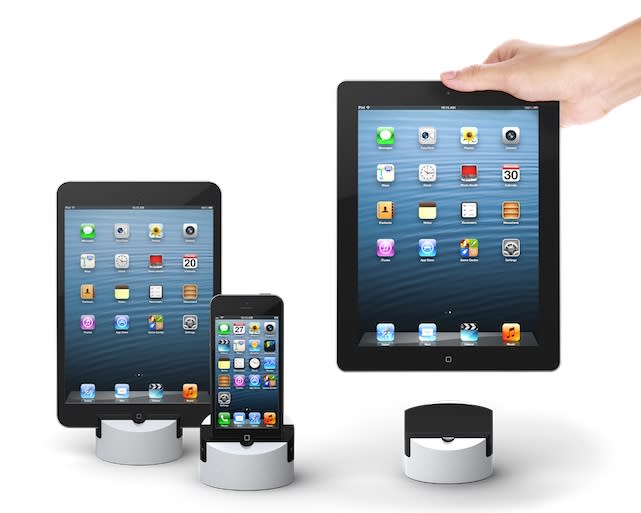 If Asimov's famous Three Laws of Robotics had been focused on a more mundane technological achievement, like iOS device docks, the first law might well have been "A dock shall not cause harm to a device, or through instability allow a device to come to harm." By that standard, the US$89 Gravitas dock from Henge is fully compliant; its ample mass and interchangeable inserts mean that your iPhone or iPad are staying exactly where you put them. (Development of the second and third laws of device docks is left as an exercise for the reader.)

The Gravitas, which we first saw on display at Macworld/iWorld in 2013, is now available in either Lightning or 30-pin flavors. It's a dense hunk of metal that's almost uncomfortably heavy to hold in one hand (mass of 1.17kg, weighing 2.54 pounds). The cylindrical dock has a downward-angled face bisected by the device slot, which is designed to adapt to any compatible iOS gadget (depending on the port type) by swapping in the appropriate plastic insert.

The dock's desk-hugging textured bottom and sheer heft mean that you can confidently insert or remove your iPad without worrying that it may go flying across your cubicle. The back of the Gravitas features a USB "A" connector (more on that below) and a 3.5mm audio-out jack, allowing you to connect the Gravitas to conventional powered speakers or even headphones. I used the Gravitas with both an iPhone 5 and an iPad Air on my desk, and, as befitting a not-particularly-inexpensive chunk of gear, it certainly caught the eye of passerby. Both devices fit into their assigned inserts (which are easy to swap once you get the hang of pulling on both sides of the dock at once), and showed to best effect. The iPhone in particular looked very sharp, like a museum piece on a plinth. The iPad, however, ended up a little bit more vertical than I liked for easy viewing when I was sitting at my desk -- I resorted to tucking my Smart Cover under the front edge of the Gravitas to provide a little shimming and tilt the dock back. Your individual ergonomics, of course, may vary -- using the Gravitas as a charging station with a photo slideshow on the iPad lock screen is bound to elicit appreciative murmurs from your neighbors.

About that USB connector, though: the Gravitas comes with and requires an unusual USB A female - A female cable, which is rarely seen in the wild. Most older peripherals like printers and hubs use an A-B cable, so buyers are likely to have a few of those kicking around; a USB mini or micro cable (often used for non-Apple phones, scanners, microphones or external battery packs) would also be a lot easier to source from the junk drawer, if necessary. Building the dock to use the A-A cable means that anyone wanting to deploy the Gravitas in multiple locations/with different computers needs to be packing a spare cable or remember to take the supplied one along. The thing is so massive, though, that I don't see many users relocating it frequently.

There are certainly cheaper docks on the market with a good deal of flexibility, but if you want to showcase your iDevice in a set-it-and-it's-grounded way while preserving the ability to change out inserts on the fly, the Gravitas delivers. You can order one direct from Henge for $89, or two for $149. (Your UPS guy may give you a cross look if you order more than two.) In this article: dock, gravitas, hands-on, henge, iPad, iPhone, lightning, review
All products recommended by Engadget are selected by our editorial team, independent of our parent company. Some of our stories include affiliate links. If you buy something through one of these links, we may earn an affiliate commission.