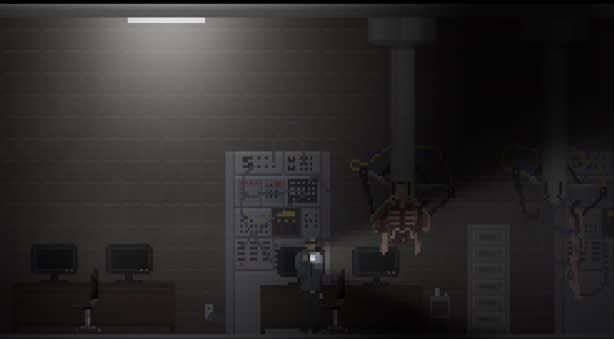 You're Tom, a security guard at a corporate facility deep in the mountains, and you have the night shift. To help pass the time, you grab a flashlight and explore the cavernous building. You walk down dark hallways, through meat-packing rooms and offices with anatomical diagrams on the walls – and eventually, you end up in places you shouldn't be, with things you wish you'd never seen.

Uncanny Valley is a survival horror, exploration and adventure game from Slovenia studio Cowardly Creations, due out around Halloween for PC and Mac. Survival is key in Uncanny Valley, but it isn't the main mechanic – there aren't many things in the game that kill you. Instead, there's a consequence system that directly impacts the gameplay and storyline. For example, if you fail to escape a group of attackers, Tom will move more slowly throughout the rest of the game, Cowardly Creations says:

"Why? Because dying and repeating the same section over and over is tedious and leads to frustration. The game stops being scary if you're angry and just want to rush through it, so we think that adding such a system will still keep the tension while adding a new layer to scariness."

Uncanny Valley is in the midst of an Indiegogo campaign seeking €5,000. It just got started this week, and it ends on June 15.
[Images: Cowardly Creations]
In this article: cowardly-creations, horror, Indie, IndieGoGo, mac, pc, Survival-Horror, uncanny-valley, uncanny-valley-game
All products recommended by Engadget are selected by our editorial team, independent of our parent company. Some of our stories include affiliate links. If you buy something through one of these links, we may earn an affiliate commission.