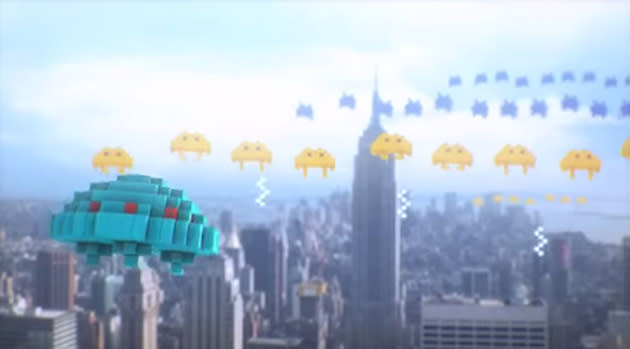 The brilliant short film Pixels kinda blew up on the web when it was released in 2010. Four years later, Sony is planning to breathe new life into the homage to old-school gaming by turning it into a feature-length Adam Sandler vehicle. The short featured classic game villains like Donkey Kong and Space Invaders wreaking havoc in New York City, eventually turning it and the entire globe into the titular elements of computerized graphics. The feature film will take the basic premise and add what passes for a plot -- aliens that resemble said video game characters see the virtual violence committed against them as an act of war. From there it falls to the stars of I Now Pronounce You Chuck & Larry to defeat the invading hordes. There's still plenty of time for this potential abomination to get shelved since filming doesn't even start 'til next month. There is one mystery left to solve, however -- with Chris Columbus at the helm, how exactly will Christmas figure into the plot?

In this article: adam sandler, chris columbus, pixels, sony, Sony Pictures
All products recommended by Engadget are selected by our editorial team, independent of our parent company. Some of our stories include affiliate links. If you buy something through one of these links, we may earn an affiliate commission.