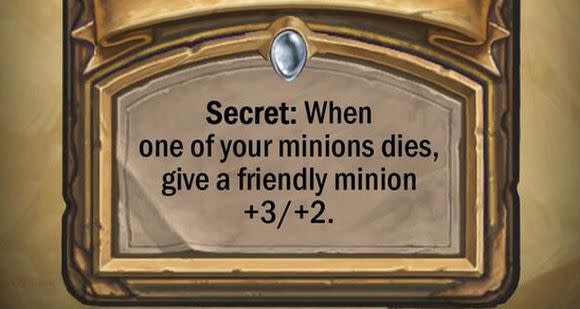 Now ... I don't want to sound like I'm whining, because as you all know WoW players never whine, but this card? This card looks just a tad over powered.

Revealed last night, a new Paladin card in the upcoming Hearthstone expansion Curse of Naxxramas, is just asking to be used in every single Paladin deck out there. The card, "Avenge," has the secret of "When one of your minions dies, give a friendly minion +3/+2." I am sure that games will be won on this card alone, and that those suffering the loss will want to avenge something themselves.

But, and this is a big but, over powered class cards seem to be a thing happening in CoN. The Druid card that's been revealed so far destroys every minion and summons Treants to replace them. Combine that with the Paladin card and we're seeing a pretty obvious pattern -- good cards that we're going to want to get and play, but that are balanced by other good cards that your opponent probably has.

Not a bad strategy for a CCG to employ, and one that has been done with other CCGs in the past. Full images of the two class cards thus far revealed after the break. In this article: curse-of-naxxramas, curse-of-naxxramas-card
All products recommended by Engadget are selected by our editorial team, independent of our parent company. Some of our stories include affiliate links. If you buy something through one of these links, we may earn an affiliate commission.