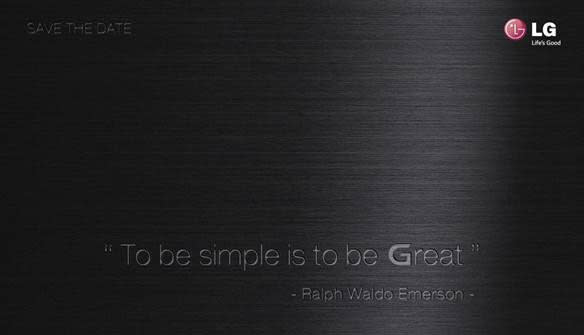 LG's new flagship phone is coming: the company told us to expect the G3 later this quarter, with a screen resolution going beyond the (increasingly standard) 1080p spec. New smartphone necessitates a glitzy press reveal, right? This time round, LG is going global, hitting up six different cities (San Francisco, New York, London, Seoul, Singapore, Istanbul) in the span of two days. "To be simple is to be Great" is the company's tagline, with that intentional capitalization likely pointing to said new smartphone, or dare we dream, the G Watch, one of the first smartwatches set to run Android Wear, Google's latest software effort aimed at making wearables a thing. We'll be in attendance at one or two of those aforementioned cities -- expect at least one product starting with the letter 'G'.

Update: A French site, Les Numeriques, says it has confirmation that the G Watch will come out in June for 199 euros (around $199) -- if true, that's a hundred bucks less Samsung's Gear 2.

In this article: androidwear, event, g3, gwatch, lg, lgg3, mobilepostcross
All products recommended by Engadget are selected by our editorial team, independent of our parent company. Some of our stories include affiliate links. If you buy something through one of these links, we may earn an affiliate commission.