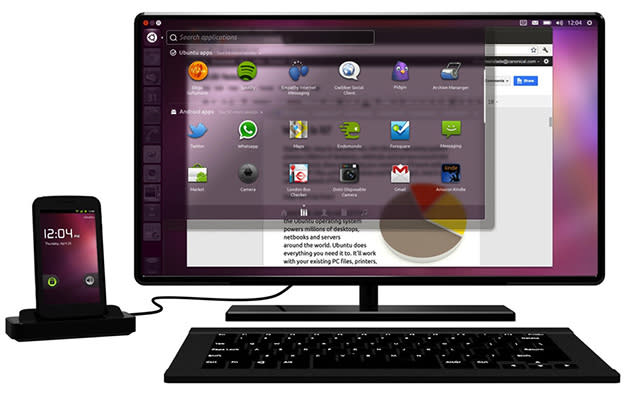 We can't say that the future of Ubuntu for Android ever looked particularly bright, but we were enamored with the concept. You'd walk around by day with a standard-issue Android phone in your pocket, but when you docked it to a keyboard, mouse and monitor, you were greeted with a full Ubuntu desktop experience. Well, Canonical has decided to put the project out to pasture apparently. Buried away in a recent bug report (now hidden from public view) was the fact that "Ubuntu for Android is no longer in development," and thus its landing page should be taken offline. Though some responses from the Canonical team appear to muddy the story, the take away is the same -- active development on Ubuntu for Android has come to a halt. It's not surprising considering that the company has invested heavily in its own smartphone OS, which already has a few OEMs signed on. Without a launch partner, the dual-boot solution never had a chance to take off, and Canonical clearly has other priorities now. Still, we mourn slightly for its passing. Here's hoping the concept lives on as an all-Ubuntu solution.

In this article: android, canonical, mobilepostcross, Ubuntu, Ubuntu for android
All products recommended by Engadget are selected by our editorial team, independent of our parent company. Some of our stories include affiliate links. If you buy something through one of these links, we may earn an affiliate commission.