Ubuntu's first tablet doubles as a desktop, goes on sale in Q2

Ubuntu Linux tablet will turn into a makeshift desktop 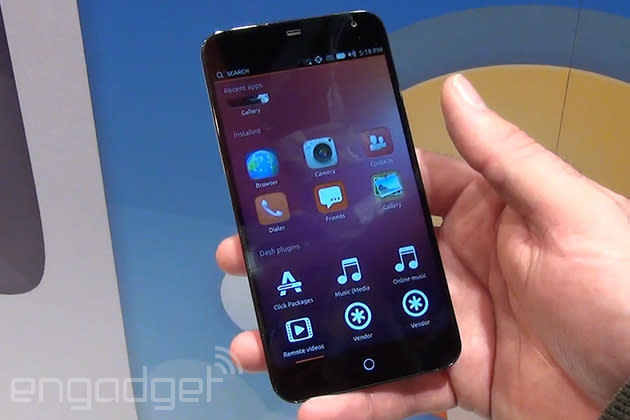 The Ubuntu Touch smartphone OS has come a long way, but it still has further to plod before it's ready for market - all Canonical will tell us that it hopes to see an Ubuntu phone before the end of this year. Nevertheless, now that some phone manufacturers are on board with the project, we've been able to play with a couple of prototypes: One was just a non-functioning handset from a Spanish company called BQ, showing off plain but solid build quality reflective of a mid-tier device. The other was more interesting -- a re-purposed Android handset from a second Ubuntu partner, Meizu, which makes light work of the operating system and interface. The UI itself hasn't changed a great deal since we last tried it, and neither has the underlying mission, which is to create an OS that extends seamlessly across phones, tablets and PCs, with virtually the same apps running on each type of screen. Check out the hands-on video below to get a better of what Canonical is aiming at, or -- if you don't mind getting your hands dirty -- try the new dual-boot developer preview for yourself on an Android handset.

In this article: bq, canonical, hands-on, linux, meizu, mobilepostcross, mwc, mwc2014, mx3, ubuntu, video
All products recommended by Engadget are selected by our editorial team, independent of our parent company. Some of our stories include affiliate links. If you buy something through one of these links, we may earn an affiliate commission.