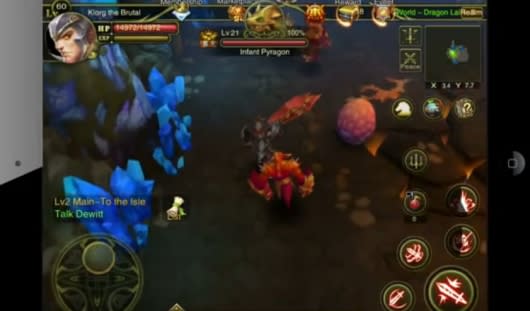 Perfect World Entertainment is expanding its catalog of games and heading off of your desktop. While the company already runs several free-to-play games, thus far almost all of them have been shackled to your home computer. Dawn of the Immortals is not; instead, it's shackled to your tablet or your phone. That's right, it's a 3D mobile action MMO for both Android and iOS devices, albeit one not currently available for beta testing.

At this point there's very little hard information about the game available -- a 15-second trailer past the break, the promise of both major mobile platforms, and the opportunity to sign up for a mailing list. Signing up for that list will also net you a little in-game doodad, which is probably nice, and it will also prepare you for when the game finally does head into the beta arena.

In this article: action, action-mmo, android, dawn-of-the-immortals, doi, f2p, free-to-play, immortals, ios, mobile, mobile-games, mobile-mmo, mobile-titles, news, news-items, perfect-world-entertainment, pwe, trailer, trailers, video, videos
All products recommended by Engadget are selected by our editorial team, independent of our parent company. Some of our stories include affiliate links. If you buy something through one of these links, we may earn an affiliate commission.