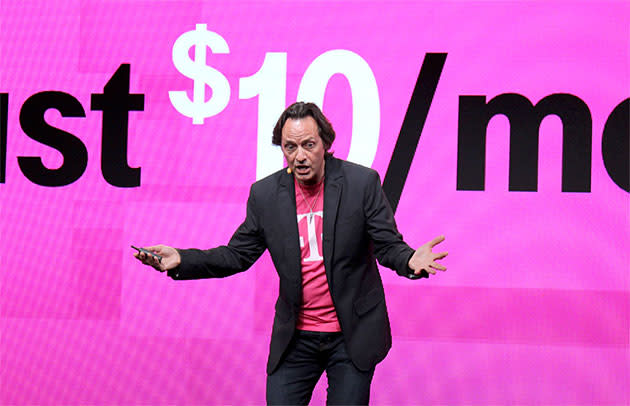 So, now we know where all those disgruntled Sprint customers have been going. In total, 2.4 million people joined T-Mobile USA's network in the first quarter of this year, with around half of those opting for the carrier's "Un-carrier" style plans, which do away with service contracts and instead provide straight-up financing to those looking for a new handset. Despite being reprimanded by an industry watchdog for its aggressive and not-wholly-accurate marketing, T-Mo actually managed to beat its last bumper quarter in terms of new subscribers, at a time when the other, bigger networks saw much smaller increases -- AT&T and Verizon each only added around half a million new postpaid customers last quarter, for example. Curiously, on the financial side of things, T-Mobile actually reported a drop in earnings -- which it blamed on the fact that it's having to expand so quickly. Another curiosity: If some of this growth really has been happening at Sprint's expense, then pretty soon it may not matter.

In this article: earnings, mobilepostcross, no contract, q12014, t-mobile, uncarrier
All products recommended by Engadget are selected by our editorial team, independent of our parent company. Some of our stories include affiliate links. If you buy something through one of these links, we may earn an affiliate commission.