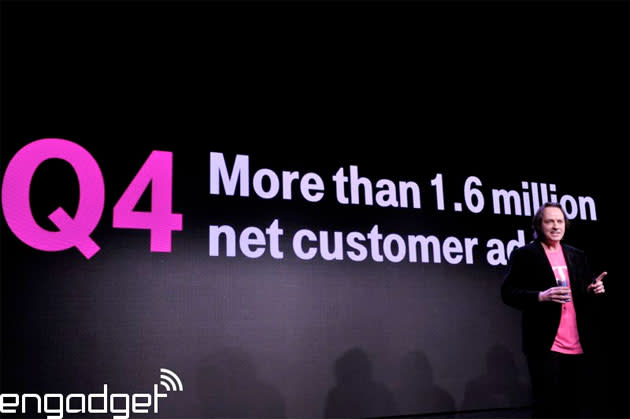 In the last quarter of 2012, things were looking down for T-Mobile. The network lost over 500,000 postpaid customers, and had lost well over 2 million customers for the year overall. Now, things are starting to turn around: at CES the company revealed that Q4 2013 was its best quarter in over eight years, and it grew by more than 1.6 million new customers in that time period. Company CEO John Legere didn't specifically say how many of these customers came from the competition but did call out Sprint has the carrier it ported the most numbers from, followed closely by AT&T and distantly by Verizon. In all, the company gained 4.4 million net customers for the year, an enormous turnaround from its 2012 losses. Naturally, Legere points to the company's Uncarrier initiative as the secret to its success. "There will never be contracts in our business! 12.2 million customers have come to simple choice."

Hungry for more mumblings from the magenta network? Check out our CES 2014 Liveblog right here! 4
In this article: ces2014, q4, t-mobile, tmobile
All products recommended by Engadget are selected by our editorial team, independent of our parent company. Some of our stories include affiliate links. If you buy something through one of these links, we may earn an affiliate commission.