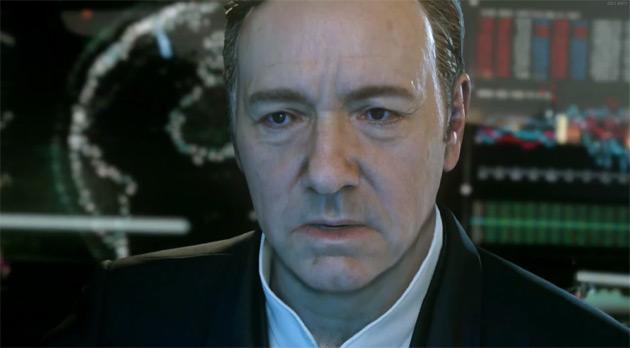 With Call of Duty being one of the most successful game franchises out there, you know there's always going to be a next one. Well, the first trailer for that game has dropped, revealing its full title of Call of Duty: Advanced Warfare, and Kevin Spacey. The House of Cards actor appears to be cast in the role of a powerful, politically driven antihero (how original), but what we're more interested in is the little hints of new and changing gameplay elements. Just as CoD 4: Modern Warfare brought the series out of the WWII era, Advanced Warfare will send us further into the future, as the presence of spider tanks, hover bikes, the 'copters from Avatar and weaponized exoskeletons suggests.

The trailer shows super jumping too many times for it not to be one of the new mechanics, which we assume will be joined by cloaking and a perk that lets you see through walls -- it looks something like the Active Radar Pulse from Titanfall in the fleeting clip, if you've been playing any of that recently. There's also soldiers shown scaling walls with special gloves and unravelling a section of plantable cover, but as the whole trailer is shot cut-scene style, there's no telling what gameplay elements you will actually be able to use, and whether they'll be single-player or multiplayer only.

Call of Duty: Advanced Warfare is being developed by Activision and Sledgehammer Games, a lesser-known studio that had a hand in creating Modern Warfare 3. This trailer footage comes from an Xbox One, but you can bet Advanced Warfare will also come to the PS4 and PCs, at the very least. With the hype train now rolling, you can bet we'll be hearing a lot more about the game before its release date of November 4th this year. Trailer below the fold.

In this article: activision, advancedwarfare, callofduty, callofdutyadvancedwarefare, hdpostcross, KevinSpacey, microsoft, playstation4, ps4, sledgehammergames, sony, video, xboxone
All products recommended by Engadget are selected by our editorial team, independent of our parent company. Some of our stories include affiliate links. If you buy something through one of these links, we may earn an affiliate commission.