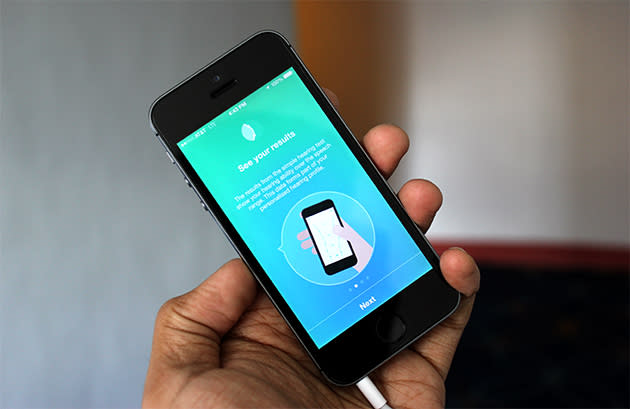 Let's face it: we live in a noisy world. If we're not sitting on loud trains or traipsing past construction sites, we're retreating into music with headphones. Alas, this also means hearing loss is a problem that can't be ignored -- that's why a startup called Mimi cooked up an iOS app to help you really figure out how far gone your hearing is.

At flrst blush, it's a little like those old grade school hearing tests: as soon as you hear that telltale pulsating tone, you tap your phone's screen. After two minutes, voila -- you've got your own personal hearing profile which shows you how well your ears respond to different frequencies. Once that's all done, you can experiment with "masks" to experience life through the ears of a middle-aged person or a construction worker (among others). The notion of hearing a pre-recorded message through someone else's ears is a little bizarre, but it does open your eyes (or ears) to what others live with everyday. Calling Mimi a mere hearing test is technically accurate for now, but the team behind it aspires to greater things. A future version of the app (which co-founder Phillipp Skribanowitz graciously let us play with at TechCrunch Disrupt NY) brings real-time audio enhancement into the mix. That mode (which will eventually cost you) chews on your hearing test data to tune the sound coming in through your headset's microphone for your own ears -- think of it as a software-based hearing aid on your phone. At this stage it's not terribly polished, but I did notice that the preset meant for construction workers did make a brief conversation a little easier to hear. Skribanowitz did say though that the team was more concerned about getting a functional product out the door, and that some of the more valuable stuff will come after the app gets a few coats of polish. Also coming down the pipeline are more traditional physical hearing aids that optimize the world's audio in the same way, though Skribanowitz told TechCrunch that the team's heart really lies in software. The biggest rub? For now, the app is tuned to work best with Apple's stock white EarPods and a pair of Sennheiser HDA 200s.

In this article: hearingaid, ios, mimi, smartphone, startup
All products recommended by Engadget are selected by our editorial team, independent of our parent company. Some of our stories include affiliate links. If you buy something through one of these links, we may earn an affiliate commission.