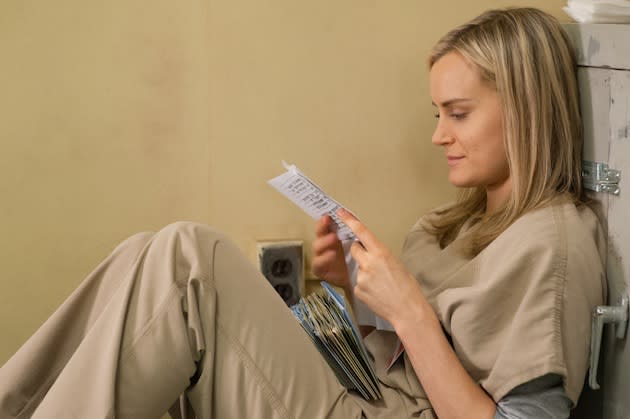 We're still a month out from the next level crazy of Orange is the New Black's second season, but Netflix has already ordered a third. The show's writing team took to Twitter (later confirming with Variety), breaking the news with a picture of possible names for episodes and some are enough to make an Engadget editor blush. "Hot For Janitor," "KIDS: YUM!" and "Et Tu, Luschek" might seem a bit tame, sure, but trust us, there's a reason we didn't embed the picture itself after the break. Considering Netflix called the show its most watched original series ever, the renewal news isn't entirely surprising but it's welcome nonetheless. There aren't any spoilers on the pictured whiteboard (as far as we can tell), so if you click you should be safe for the June 6th premiere, Dandelion.

In this article: hd, hdpostcross, Netflix, OrangeIsTheNewBlack, piperchapman, renewal, streaming, StreamingVideo
All products recommended by Engadget are selected by our editorial team, independent of our parent company. Some of our stories include affiliate links. If you buy something through one of these links, we may earn an affiliate commission.