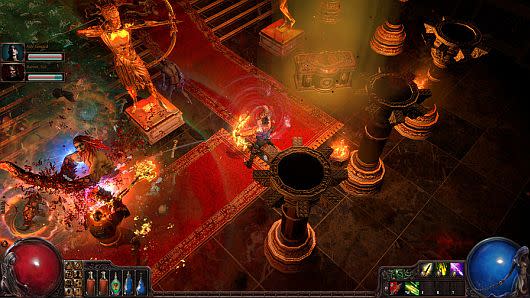 Grinding Gear Games has announced a brand new two-week race event for Path of Exile that involves prizes and a special in-game item that will benefit the Child's Play charities.

The new helmet skin, called the Angelic Mask, costs $5 and will be available only during the two-week event. The race itself is described as an ambush/invasion featuring prizes that include in-game items, NVIDIA graphics cards, signed art prints, and much more.

Check out the full press release after the cut for more details.

Auckland, New Zealand - May 5, 2014 - Grinding Gear Games announced today that they are launching a two-week Path of Exile Ambush/Invasion race event to benefit the Child's Play charity. The event will start at 1pm Pacific on Saturday, May 10, 2014 in the Path of Exile game and run till Saturday, May 24, 1pm Pacific.

Grinding Gear Games has created an exclusive new helmet skin call the Angelic Mask specifically for this charity event. The mask will cost $5.00 and only be available during the two week event with 100% of the proceeds being donated directly to the Child's Play charity.

Participants during the event will be able to win great in-game prizes such as special micro-transactions as well as signed art from Path of Exile. Additionally, Grinding Gear Game's partners such as NVIDIA and Razer have contributed an awesome array of keyboards, mice and graphic cards that will also be awarded to participants. Grinding Gear Games will pick winners randomly from the participants whose characters reach the following levels or higher. Participants can win prizes from multiple tiers as their characters level up.

Prizes available in the random draw include:

More information about the Path of Exile 2 Week Charity Race to Benefit the Child's Play Charity can be found at: Path of Exile Charity Race to Benefit Child's Play
In this article: angelic-mask, charity, childs-play, contest, event, grinding-gear-games, path-of-exile
All products recommended by Engadget are selected by our editorial team, independent of our parent company. Some of our stories include affiliate links. If you buy something through one of these links, we may earn an affiliate commission.