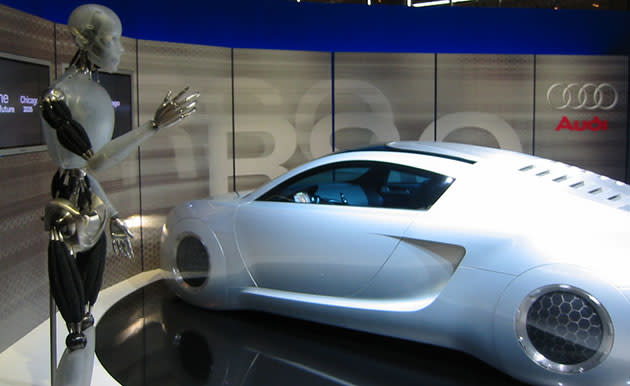 While we're monkeying with our MakerBots, large corporations have much better toys to play with. They insist on calling them "additive manufacturing" machines but, truth be told, they're just Replicators with a superiority complex. They sinter or melt powdered or solid metals using lasers or electron beams, then deposit them in layers to form objects. Companies were previously leaning on such (incredibly expensive) devices for rapidly building prototypes like the Audi concept car shown above. Though that's still a huge part of the industrial 3D printer business, the machines are now churning out finished products as well.

As the Economist points out, industry giants like Siemens are using selective-laser melting to build gas turbines faster and cheaper. That'll eventually reduce part prices by up to 30 percent and order times by 90 percent. The technology is also being rapidly adopted by the aviation business, with GE building nozzles for its next-gen Leap fanjet engines with electron beam melting printers, for instance. That makes for a product that's a quarter lighter and five times stronger than before, something most travelers would surely get behind. That's why the additive manufacturing industry is booming 40 percent higher than last year -- and explains why companies like Epson are neglecting consumer 3D printers in favor of industrial models.

In this article: 3DPrinters, AdditiveManufacturing, GasTurbines, Lasers, LaserSintering, Prototyping
All products recommended by Engadget are selected by our editorial team, independent of our parent company. Some of our stories include affiliate links. If you buy something through one of these links, we may earn an affiliate commission.