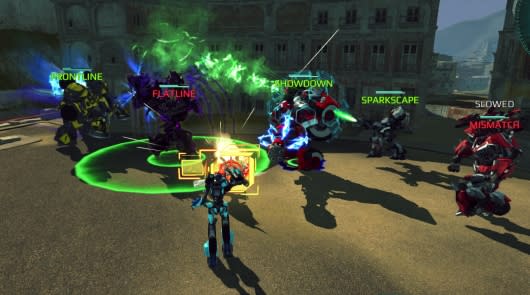 I have high hopes for what Transformers Universe could be. The game has changed a great deal from its original inception, going from an MMO tying into the then-current Prime series to a MOTA under the Generations banner. And you know that things have gotten at least a little odd when a game makes up an entirely new term to identify itself. What is a MOTA, anyway?

From a look at the recent press preview event, I'd say it's World of Warcraft battlegrounds with League of Legends champions and some World of Tanks elements. Sort of. There might be more.

As the above implies, we recently had the opportunity to take a look at some preview footage explaining how the game worked and what the actual play would be like. The game is certainly looking nice, especially when you consider that it's a free-to-play browser game built in Unity. But the proof is always going to be in the gameplay, and while it's hard to say for certain how well it delivers from mere preview videos, it's certainly intriguing.

The first thing I saw was what appeared to be a light form of PvE content, with several Autobots fighting off zombified Decepticon drones attacking the central Autobot base. Clearing drones meant extra energon cubes, a currency used for recovering your various Autobots in the event of catastrophic system failure -- i.e., death. This came into play during the main PvP match, which was accessed via jumping into the hub base (a social lobby area) and then queueing up as in a battleground.

The actual PvP mechanics were fairly straightforward, functionally a 4v4 arena with a kill counter. What made things more complex was the fact that dying didn't simply mean a respawn. When one of your Transformers is knocked out, you can repair it immediately for an energon cost, or you can bring out a different Transformer. The injured characters are repaired over time, as well, but there's an element of strategy in choosing whether you want to swap mid-match or would be better served repairing your damaged soldier.

Each of the various 'bots was shown with a different specialty (i.e., playstyle) and a small play guide that outlined its purpose and approach. From watching the maps, I discovered that Assassins are heavy DPS designed to take down opponents, Guardians are pure healers, Auxiliaries are DPS/healing hybrids, and Vanguards function as tanks. There were also a lot of different Transformers on display; Outsider, Wheeljack, Sparkscape, Overclock, Monsoon, Catapult, Meltdown, Showdown, and Frontline were all in the selection. Each one also had multiple different color selection, some of them quite appropriate (Meltdown, a dedicated healer, had a Ratchet-like scheme available).

Characters have three different weapons and three cooldown abilities for use, much as you'd expect from a game with one foot in the MOBA door. We were told that the emphasis was on using abilities properly rather than skillshots, although Catapult's sniper rifle appeared to offer free aiming. Transforming itself was a quick button tap, and as you'd expect, some abilities and weapons are accessible even in your vehicle form. Driving around, players will steer with the mouse, emphasizing ease of control. Each vehicle also has a different profile: Heavy off-road vehicles perform better than sports cars on dirt, but they move more slowly overall, while dune buggies can handle offroad without a problem but tend to bounce around a bit.

Perhaps most importantly, the whole thing looked right. Characters would race to the battle in vehicle mode, transform, and start shooting. Snipers like Catapault would take their shots, then transform and speed away before their positions were overrun. Melee characters would wade in, blocking off Decepticons, with medics swapping back and forth between heals and offensive weapons as the situation warranted. At a glance, it could pass for any battle out of a given animated series.

It's hard to be certain how well Transformers Universe will live up to expectations before launch, but I found myself interested in what I saw. Even if might not be someone's main game, it's certainly something I can see sinking time into from the preview. How it actually plays will make the difference in the end, but what we've seen is promising.

In this article: featured, game-mechanics, half-feature, hasbro, hasbro-inc, jagex, jagex-games-studio, moba, mota, news, news-item, news-items, preview, preview-analysis, previews, stop-making-up-acronyms, tfu, transformers, transformers-universe, video-preview
All products recommended by Engadget are selected by our editorial team, independent of our parent company. Some of our stories include affiliate links. If you buy something through one of these links, we may earn an affiliate commission.