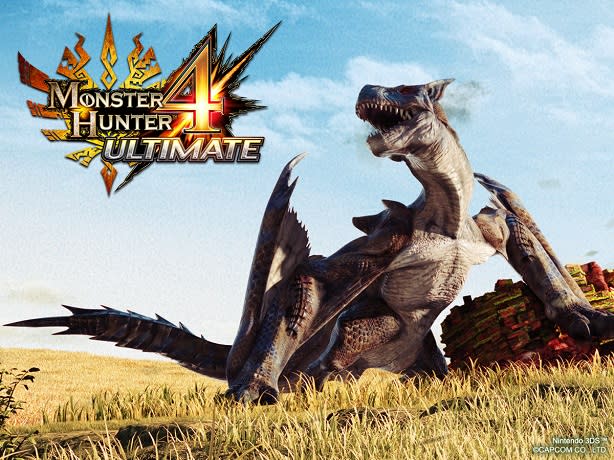 Alongside Capcom's financial report for the 2013 fiscal year yesterday, in which it revealed an increase in net income by 15.9 percent year-over-year, it also offered some projections for the upcoming financial year (ending March 31, 2015). Given the continued success of its Monster Hunter brand, Capcom projected sales of Monster Hunter 4 Ultimate to reach 3.9 million units in North America, Europe, Japan and other Asian countries. The game will reach the west in early 2015.

Additionally, Capcom reported that its strategy for mobile includes the launch of Monster Hunter Freedom Unite on iOS this month. The PSP game went free for PlayStation Plus users in March. Capcom also plans to launch another mobile game in the series this year called Monster Hunter Smart. The company noted strategies for PC in Japan and other parts of Asia, namely by introducing the beta phase of Monster Hunter Online as well as Breath of Fire 6 this summer. The latter was announced in August 2013 for PC, iOS and Android, whereas the former is the result of an April 2013 partnership between Capcom and Tencent to bring the free-to-play MMO to PC players in China.

Lastly, Capcom mentioned plans to "develop titles exclusively for online games," specifically mentioning Deep Down for PS4, a free-to-play game first announced in September.
[Image: Capcom]
In this article: 3ds, android, breath-of-fire-6, Capcom, earnings, financials, fy-2014, fy-2015, ios, ipad, iphone, mac, mobile, monster-hunter, monster-hunter-4, monster-hunter-freedom-unite, monster-hunter-online, monster-hunter-smart, nintendo, pc, projection, sales, strategies, tencent
All products recommended by Engadget are selected by our editorial team, independent of our parent company. Some of our stories include affiliate links. If you buy something through one of these links, we may earn an affiliate commission.