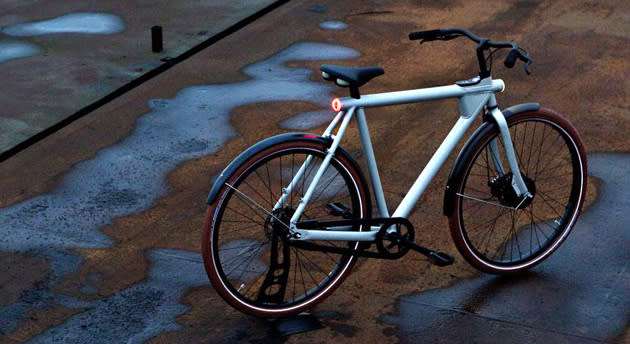 With certain exceptions, many electric bicycles make it all too clear that there's some technology involved: they're big, heavy and otherwise ungainly. You won't have those gripes with the new Vanmoof 10 Electrified. It hides a 250W pedelec (that is, pedal-dependent) motor and batteries in a frame which isn't much bigger than that of a regular bike, and is actually a bit charming with its minimalist (if very PVC pipe-like) design. It's a relative featherweight at 42 pounds, too, and it includes GPS tracking to help catch thieves. The Electrified isn't going to outrace the Specialized Turbo with its almost pedestrian 18MPH top speed, but it also costs nearly half as much at $2,998. That's just low enough that it could be the right e-bike for your daily commute -- especially if you'd rather not give up some style just to get a performance boost.

In this article: bicycle, cycling, e-bike, electrified, pedelec, transportation, vanmoof, vanmoof10electrified
All products recommended by Engadget are selected by our editorial team, independent of our parent company. Some of our stories include affiliate links. If you buy something through one of these links, we may earn an affiliate commission.