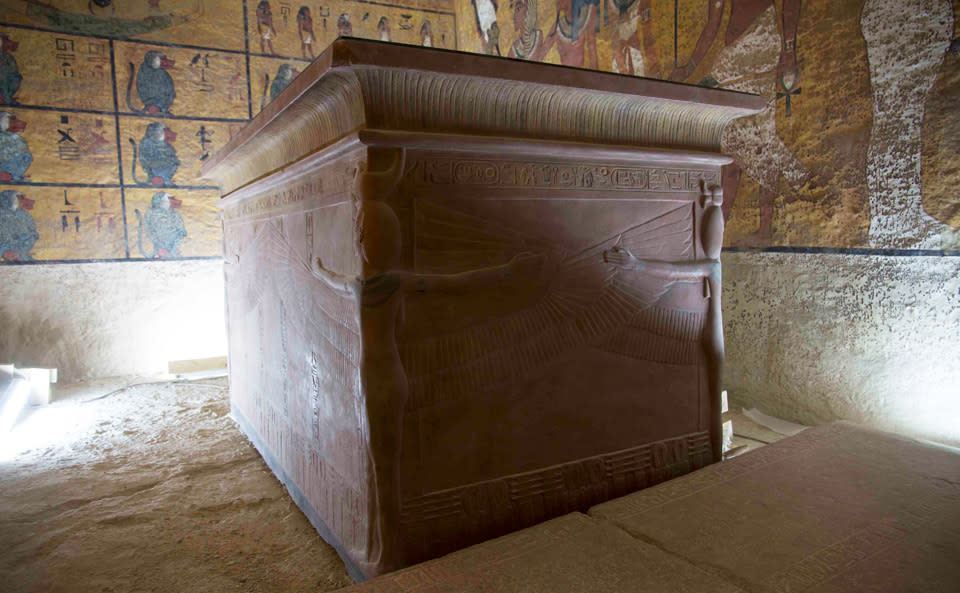 The image above isn't Tutankhamun's tomb, but the most accurate large-scale facsimile ever made. The replica was created by Factum Arte, from Madrid, Spain, in conjunction with the Supreme Council of Antiquities in Egypt. The real tomb has been open to the public for many years, and suffered gradual decline as a result. The replica has recently opened to the public, and will soon take all the tourist foot-fall strain, while the original is retired for conservation purposes. Factum Arte used a low intensity red light laser with a resolution of 100 microns, a 3D white light scanner (250 - 700 microns resolution), along with hundreds of man hours (and patience) to take detailed scans of everything in the chamber. A milling machine then used the data to carve out incredibly detailed 3D surfaces of the walls and sarcophagus. High resolution cameras, color-matching and digital stitching techniques were used to re-create the art and imagery on the walls. The same techniques will also be used to create replicas of the Tombs of Seti I and Nefertari -- both of which currently closed to the public.

In this article: 3d scanning, TheBigPicture, tomb, Tutankhamun
All products recommended by Engadget are selected by our editorial team, independent of our parent company. Some of our stories include affiliate links. If you buy something through one of these links, we may earn an affiliate commission.