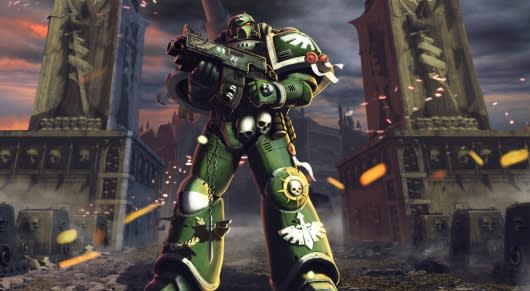 While nobody can claim that the Warhammer 40,000 universe is lacking in locations, the team over at Behaviour Interactive thought it was important enough to create a new planet specifically for Eternal Crusade's setting.

Art Director Ghislain Barbe talks about the planet Arkhona in his latest dev diary, saying that it lies smack dab "in the dead center of a void of systems." Arkhona used to be home to the Xenos, but now is ground zero for a five-way tug-of-war when it's not trying to tear itself apart with natural disasters. Or as Barbe puts it, "Death has come to Arkhona and it is ready for a second service." The look of the planet is replete with abandoned structures, shattered chasms, and diverse environments.

Barbe also mentioned that one of the priorities of the art team is to support tons of customization. "Lots of research was done to see how far we could push what we offer without harming game performance," he said.
In this article: action-mmorpg, arkhona, art, behaviour, behaviour-interactive, customization, environment, eternal-crusade, Ghislain-Barbe, lore, setting, warhamer-40k, warhammer, warhammer-40k-eternal-crusade, warhammer-eternal-crusade
All products recommended by Engadget are selected by our editorial team, independent of our parent company. Some of our stories include affiliate links. If you buy something through one of these links, we may earn an affiliate commission.