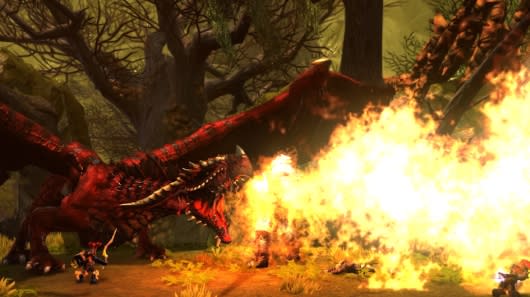 Stupid dragons. They think they're so special, with their wings and their breath weapons and their intelligence and their hides like armor. Sure, maybe all of that is pretty special when you think about it, but that's not the point. While we can't be sure just yet, though, it's a fairly sure thing that the next Neverwinter module will indeed allow you to put some dragons in their place; after all, the next module is dubbed Tyranny of Dragons. Seems like it would involve some draconic influence there.

Tyranny of Dragons is due for release on August 14th, 2014. Unfortunately, we have no further details at this time outside of the fact that it will include dragons and will tie into the overarching story of the same name moving through the Dungeons & Dragons product line. Regardless, you'll want to get your best dragon-slaying shoes on for late summer because it's high time you showed those dragons what you think of them. (They're not so big.)

[Source: Perfect World Entertainment press release]
In this article: action-mmo, cryptic, cryptic-studios, dnd, dungeons-and-dragons, expansion, expansions, f2p, fantasy, free-to-play, metaplot, module, neverwinter, news, news-items, patch, patches, perfect-world, perfect-world-entertainment, pwe, release-date, setting, tyranny-of-dragons, update, updates, wizards-of-the-coast
All products recommended by Engadget are selected by our editorial team, independent of our parent company. Some of our stories include affiliate links. If you buy something through one of these links, we may earn an affiliate commission.