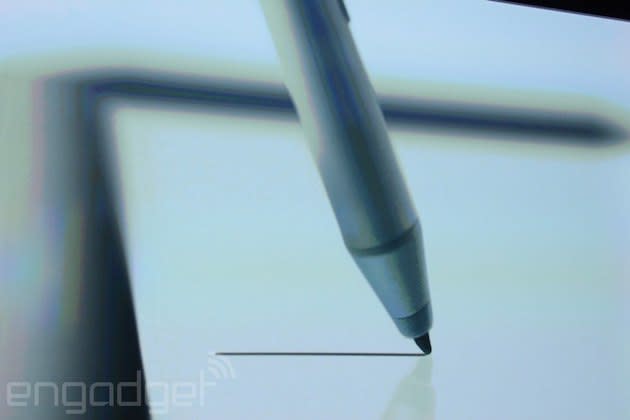 Satya Nadella and his team are hosting an event in New York City, where Microsoft has already revealed its Surface Pro 3. Not surprisingly, the company's placing a lot of focus on the integrated pen. "When you hold a pen in your hand, it has to feel light," said Panos Panay on stage. But what exactly is Microsoft doing to make this happen? Well, according to Panay, it is very important to know that the Surface Pro 3's pen is "not a stylus," but rather meant to mimic a real, ink-based pen, with a similar form factor and weight. To show off the new N-trig-powered pen, Microsoft brought out the New York Times Crossword app, which you can see in action in the video below. Also shown off on stage was Final Draft, an app designed specifically for the Surface Pro 3 that uses the pen to let you edit movie scripts in real time. "It doesn't just mean writing; it's experiences," said Panay about the applications. That's not it, though, as you can also use it to take notes with OneNote -- a simple click on the pen seamlessly sends your scribbles to the cloud, even if the device is off. Photoshop CC users, meanwhile, can expect some integration with an upcoming touch-friendly version Adobe is working on, which is expected to be optimized to take full advantage of Microsoft's new tablet. As Adobe's Michael Goff puts it, the software is expected to be "a creative's dream come true."

Best of all, perhaps, the Surface Pro 3 can be turned on by simply clicking a button on the pen, which will come in handy during times when you just want to pick it up and make a quick note or two. With the camera, meanwhile, you can use the pen to capture photos and, if you want, doodle or take notes over them. There's no doubt that Microsoft has definitely gone the extra mile to make the pen a key component of the Surface Pro 3 -- now it's just up to third-party developers to unleash its full potential.

In this article: Microsoft, Microsoft Surface Pro 3, Surface Pro 3
All products recommended by Engadget are selected by our editorial team, independent of our parent company. Some of our stories include affiliate links. If you buy something through one of these links, we may earn an affiliate commission.