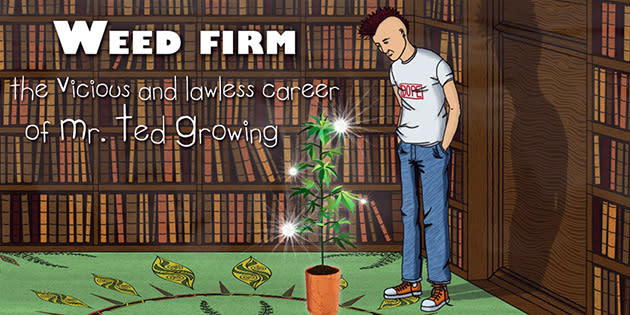 ​I was just about to tell you about Weed Firm, an insanely addictive app that tasks you with building a marijuana empire from your house in the suburbs, but I feel a little bad about gushing... because it's no longer available to download. Yes, it's been pulled from the App Store. (It's also been removed from Google Play, but for unrelated reasons.) As recently as yesterday, the free app held the number two position on the charts in Apple's store, and it's almost guaranteed that it disappeared due to concerns about illegal or otherwise "controversial" content. (Apple's famously mum about the reasons behind booting certain apps.)

Even though the Weed Firm app includes a disclaimer about not encouraging illegal activities, the fact is you're growing Purple Haze, smoking up customers, paying off crooked cops and probably loving every minute of it. It seemed a bit strange that Apple -- not to mention Google -- approved the app in the first place, but considering how many weed-related apps are still available for download through Apple, it's a bit odd that it's now gone.

According to a statement released by Manitoba Games, the studio behind Weed Firm, the game may have been pulled because of its material -- combined with the fact that it became so successful so quickly:

"We guess the problem was that the game was just too good and got to number one in All Categories, since there are certainly a great number of weed-based apps still available, as well as games promoting other so-called illegal activities such as shooting people, crashing cars and throwing birds at buildings."

Throwing birds at buildings might not be exactly the same as growing and selling a drug that's illegal in most countries, but you get the point. While we'll likely never know exactly why Apple pulled the plug, it's worth noting that other apps have never even made it into the App Store despite containing no illegal content. HappyPlayTime, which teaches women about their bodies via an anthropomorphized cartoon vulva, was recently rejected, even though racier apps are available for download.

Tina Gong, who created HappyPlayTime, said that she would focus on developing a web-based version of the app instead. And the makers of Weed Firm may do the same; while explaining that content may need to be adjusted to meet the App Store's standards, the devs also talk about taking the game elsewhere:

"As for the other platforms, we will endeavor to make it as censorship-free as possible while assigning the highest maturity rating to the game. We do not want kids playing Weed Firm, but we firmly believe that adults should have a choice to do whatever the hell they want as long as they are not hurting anybody in the process."

Like it or not, the App Store is Apple's to regulate, so while these titles may seem fairly innocuous, you may have to start looking elsewhere to get your fix. Manitoba Games says Weed Firm should be back on Google Play pending a change in publisher, but iPhone users may be going through withdrawals for a bit longer. Of course, you always have the option of sideloading apps provided you can find the .APK files online. And now's a better time than ever to back up the apps you've been lucky enough to snag while they're still available.
In this article: app store, app store approval, apple, google, google play, mobilepostcross, rejected apps, weed firm
All products recommended by Engadget are selected by our editorial team, independent of our parent company. Some of our stories include affiliate links. If you buy something through one of these links, we may earn an affiliate commission.