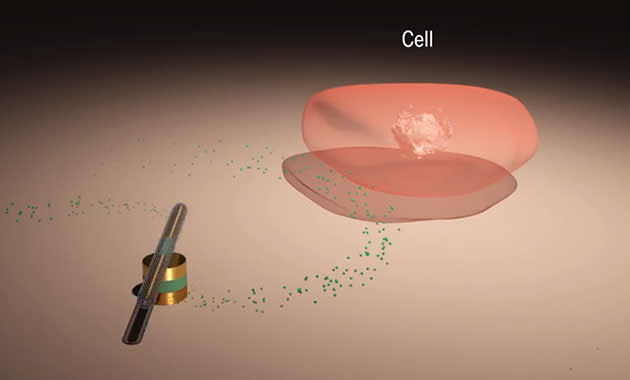 Scientists at the Cockrell School of Engineering in Texas have created a nanomotor less than one micrometer in diameter, smaller even than a cell. Powered by electric fields, it consists of a nanowire, magnet and electrode and can spin at a terrifying-sounding 18,000 RPM for over 15 hours (see video below). That's as fast as a jet engine, but don't worry (much). During testing, it showed the ability to pump fluids at hyper-fast speeds and to move around freely in other liquids. That opens up beneficial applications like highly controlled insulin delivery, or devices that could specifically target malignant cells. Of course, that would mean you'd have to let intelligent nano-devices with mini-saws roam about your body -- I guess you're allowed to be a bit terrified.

In this article: cell, drugs, Motor, NanoMotor, Nanotechnology, video
All products recommended by Engadget are selected by our editorial team, independent of our parent company. Some of our stories include affiliate links. If you buy something through one of these links, we may earn an affiliate commission.