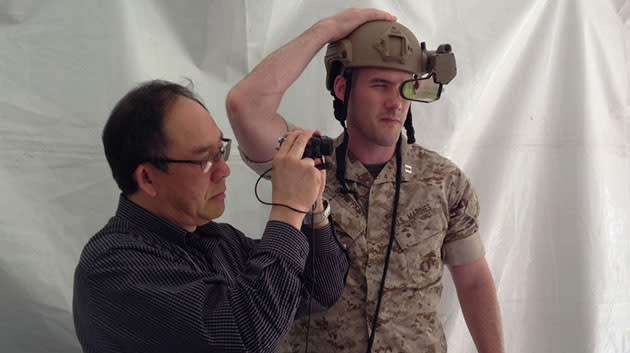 DARPA has long sought a heads-up display to give soldiers situational awareness without distracting them, and it looks like technology has finally caught up to that ambition. It recently unveiled a new ULTRA-Vis prototype at its DARPA Demo Days, saying the breakthrough was a "holographic wave guide" display. Similar to how the Oculus Rift headset works (but not in 3D), it'll project color images locked to the terrain -- even if you move your head -- thanks to motion-sensing and GPS systems. For instance, targeting icons will stay fixed on enemy or friendly positions, even tracking targets behind GIs with a 360-degree ring-like display. It'll also allow soldiers to communicate with each other, their base camp or air support, and play drone video in the display. Like similar projects, the prototype is far from battle-ready, but will function as a test-bed for all of DARPA's wild ideas until the final design is complete.

In this article: Army, DARPA, display, HUD, Soldiers, ULTRA-vis, VR, WearableDisplay
All products recommended by Engadget are selected by our editorial team, independent of our parent company. Some of our stories include affiliate links. If you buy something through one of these links, we may earn an affiliate commission.