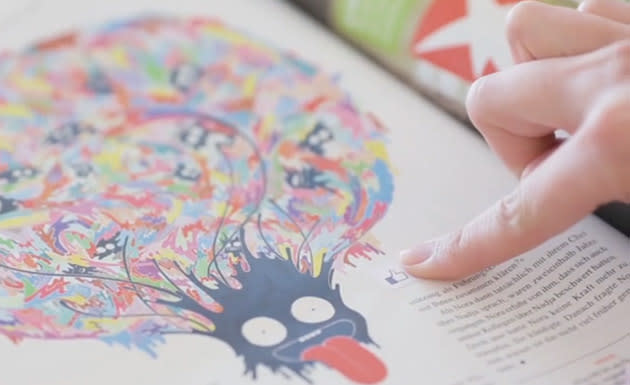 A developer called Metaio believes it can make a smartglass interface far more interesting than what Google has done thus far: one that can turn any surface into a touchscreen. Unlike Disney's REVEL or that Ubi Kinect app, which can do similar things, Metaio's technology tracks the heat of your fingertips using an infrared and a regular camera. When you do touch something, the system will complete the experience with augmented reality -- for instance, "clicking" Like on a physical magazine will show you an animation of the action through your smartglass. While the technology's far from coming to market, the company says it has a lot of potential applications. People can use it to play virtual board games, designers can use it to visualize their creations in 3D before making real-world versions and it can add digital content to toys, among many other possibilities. Sound interesting? If you're in Santa Clara, California, you can see the "Thermal Touch" prototype at the Augmented World Expo on May 27 to 29. Otherwise, head after the break for a video that demonstrates what the interface can do in the future.

In this article: interface, metaio, SmartGlass, thermaltouch
All products recommended by Engadget are selected by our editorial team, independent of our parent company. Some of our stories include affiliate links. If you buy something through one of these links, we may earn an affiliate commission.