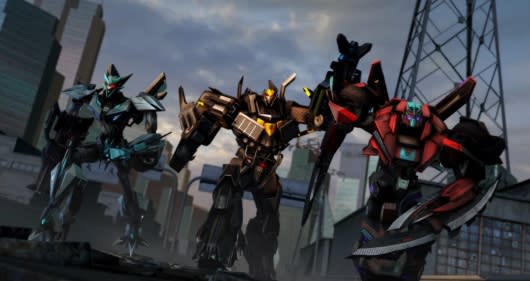 It's taken a long time for it to approach launch, but Transformers Universe is closer to being ready for public consumption than ever before. It's got pre-launch bonus sales in effect, it's revealing Autobots and Decepticons alike, and it's showing off its gameplay. If you're excited to see more of what's going on behind the scenes, you'll be happy to learn that the development team has offered a peek into the development with a new series dubbed "Under the Hood."

So what's in the first episode? Aside from a text-only Q&A with vice president David Nicholson, the episode looks at the Founders program, a peek at voices, and a detailed discussion of what the game will play like and where it's going in the future. That includes plenty of footage of robots turning into cars and beating the tar out of one another, for the record. Check out the video and the Q&A just past the break.

How have you found the fan response to the Transformers you've created for the game?

Well, being able to design and implement our own Transformers could have been a double edged sword, especially when it comes to the fans and their respect and love for the Transformers brand. We're really pleased, the fan response has been overwhelmingly positive. It's obviously a huge honor, privilege and responsibility to introduce new characters into the Transformers universe. Throughout development we've worked very closely with Hasbro, sharing our initial thoughts and ideas, taking on board their feedback and working within the existing Transformers canon.

Can you talk about the process of creating new Transformers, and why you felt it was important to generate new ones for the game?

The actual task of introducing new characters starts with research. Hundreds of Transformers already exist across movies, TV shows and books, so we want to make sure we're not overlapping with something that's already in place. After that, it becomes a collaborative process between the creative team and the concept team as they start working up concepts, and develop initial thoughts on names biographies and backstories for the characters. It's an exhilarating process! We're really excited about the characters that we've created, and can't wait for players to get their hands on them.

Where did you take inspiration for the type of game Transformers Universe is?

MMOs have been a growing genre for many years now and it's been interesting to watch the transition from traditional MMORPGs through to MOBAs and on to war games like World of Tanks. We don't like being pigeon-holed and feel that Transformers Universe, as a blend of strategic, tactical and collaborative game play is best described as a multiplayer online tactical action (MOTA) game. There's huge competition out there for people's attention, from games, films, TV, books and more, and we think Transformers Universe can really stand out because not only is it Transformers, and millions of people around the world have grown up with this brand for 30 years, but we've got a game that, irrelevant of the brand attached to it, stands on its own merits. The game plays to many strengths. It offers players the chance to collect these great Transformers warriors and lead them into battle; it lets you go head to head against players from around the world; and it features game modes that suit your style of play. Ultimately, who doesn't like huge robot warriors that can kick ass and who also have fantastic and growing back stories. It's the perfect mechanical storm!

Can you talk a bit about the background of the story and how that was created?

We've been able to build on established lore and really take Transformers Universe off in a unique direction. Narrative will be an important part of Transformers Universe and the way gamers play it will impact on how the story develops. We've worked very hard with Hasbro on building out the storyline for Transformers Universe, and as part of that we've added award-winning music video and feature film director, Alex De Rakoff, to the team to help establish tone and narrative for the game too.

What are your future plans for rolling out content?

Obviously our current focus is on delivering a great product for launch. We are using the beta period to get feedback from real players and understand what's working for people and what isn't.

After that we'll be more open about our future plans. We've got plans for content updates, significant narrative events that are really going to steer the story and a pipeline of numerous bots that players are going to meet post-launch. But, at the moment, the focus is all about the here and the now, and that means releasing a product that is worthy of the Transformers brand as well as being worthy of the fans loyalty and patience.

How does the pricing structure work for the game?

Transformers Universe will be free-to-play and content will not be gated by a subscription. If you've got the time then you'll be able to get everything you want without spending a penny. We want players to experience the best of what we're offering, while allowing those that are a little more time constrained the option of getting into the experience a little quicker.

Are you hoping to pick up fans of the movies with the release coming this summer?

Firstly, and I say this from the perspective of being a Transformers fan, it's going to be a bumper summer for people like me! It's completely serendipitous that the film and Transformers Universe are released within the same time frame. There is very little content or story overlap between the film and the game. That said, the fact that there is another movie hitting the screens at a similar time as Transformers Universe is being played, can only bode well for both the hardcore fans and the more casual observers. You can enjoy the movie experience and then come home, log on and continue the adventure in the comfort of your own home
In this article: backstory, community-q-and-a, game-mechanics, intellectual-property, ip, jagex, licensed-games, lore, news, news-items, preview, q-and-a, setting, tfu, transformers, transformers-universe, tu, video, video-preview, videos
All products recommended by Engadget are selected by our editorial team, independent of our parent company. Some of our stories include affiliate links. If you buy something through one of these links, we may earn an affiliate commission.