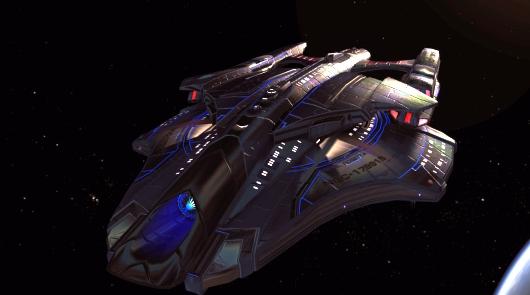 It's strange to be stepping on to an unfamiliar bridge, isn't it? To be in charge when previously you were just an observer, especially when the crew hasn't necessarily changed at all. But you didn't come here to read my metatextual woolgathering; you came here because you want to read about Season 9 of Star Trek Online. Yes, it's been out for about a month now, but that's enough time to get a fairly good sense of it, isn't it?

Season 9 is an odd beast, in some ways; elements of it suffered for its long development, but it moves the game as a whole forward and introduces some interesting shifts all around. Its biggest weakness is in how much of it is based not around content so much as improvements of existing content and systems. But let's not focus on that; let's start at the huge upheaval that came with the featured episode and the overhauls it brought.

Surface Tension: Iconians, Xindi, and the death of PvP?

After four years of game time, the war between the Klingon Empire and the United Federation of Planets is finally over. I will admit that this gave me quite a charge; for all that I like the game, the conflict between these two factions has always seemed to be enforced more for the sake of an arbitrary mechanic than anything. These factions don't make a lot of sense as enemies any longer because there's too much history of both sides coming together, especially when confronted with the menace of shape-shifting enemies.

That having been said, I do wonder what this means for the game's future vis-a-vis PvP. Romulans already put the whole back-and-forth on shaky ground, seeing as it's hard to justify the fragmentary survivors allying themselves with one side or the other going to war with the other faction, but now there's no justification left. Back at the beginning of this year, Terilynn Shull argued that the game needed to commit one way or the other; it seems to have committed, and I wouldn't be surprised if Season 10 sees KDF ships docking at Earth Spacedock. Separate factions, but able to interact more organically.

The episode also featured something I doubt anyone expected after all this time: The Iconians have finally made their first appearance in the game! I've got mixed feelings about this one. In some ways, the design looks kind of cheesy, almost more at home in a fantasy game. But looking at the design and the armor, I see hints at designs we've seen from the Elachi, the Borg, the Undine, the whole thing... and we see just how powerful the Iconians really are. That raises the question of what they've been doing when they were thought defeated so long ago and why they're coming back in force now of all times.

Meanwhile, on the list of things that you wouldn't expect to see, the Xindi showed up at the delegation. Call me crazy, but I'd like to think this might be a gentle hint at what we'll see with Season 10 and the rumored expansion of this year. We know that Denobulan captains exist in Starfleet now, but the Xindi were wholly unexpected... and it seems odd that they'd be introduced just for the heck of it without hinting at the future.

Whenever you make a big change, you have to choose whom you're going to negatively affect compared to the long-term health of the game. And make no mistake: If you were playing a captain fully caught up to reputations, you lost a bit with this change. You went from having eight active traits from reputation to only four for space and ground. Sure, they might have been the four you wanted, but a decrease in power is still a decrease in power.

At the same time, it's a net improvement for the game as a whole. New captains have fewer options than veterans, but they're never going to be as firmly on the back foot. And perhaps more importantly, traits are now a lot more functional and flexible, allowing you to alter your builds to reflect what you need to do without requiring constant respecs.

Unifying the reward structure makes sense, although it does highlight how two of the five major reputations don't have ancillary items to collect for projects. Still, it makes some of the older reputations feel less pointless and more rewarding when you bring characters through them, rather than encouraging you to focus only on projects for the newest track. There's still some legacy bits here and there that could use an update, though; unlocking MACO armor costumes still references the now unobtainable Mk XI set. Outside of Surface Tension, the new content for Season 9 comes down to a revamp of the Borg/Undine story arc (which I haven't yet gotten to play) and a few queued PvE missions. That might be its biggest weakness, really; once you've sorted out the new kit and reputation systems, you're left without a great deal to do that you weren't able to do whilst wandering around in the Solanae Sphere beforehand.

Undine Assault, much to my surprise, is a pretty challenging map when your team isn't coordinated. Most of the group queues just sort of happen, but this one doesn't allow much margin for error. By contrast, Viscous Cycle is quite forgiving, but it's also fairly fun, even if the new fluidic space effects make maneuvering a bit of a chore. (This is why the impulse engine upgrade is so important, I know.)

It's a lot more stuff that's there to be repeated and should stay fun to do for a while, but it still runs the risk of making people a bit tired of it. But maybe this is just setting the stage. Season 8.5 was a bit unexpected, and perhaps we'll see something similar to bridge the gap between 9 and the upcoming and as-yet-undiscussed Season 10, which may well be that late-year expansion...

Feedback can be left down below or mailed along to eliot@massively.com, as those familiar with my other columns on the site will remember. I'll be back next month to talk about news and updates for the games, and if we have a particularly slow month, I'll be talking in more depth about Legacy of Romulus in retrospect.

Space, the final frontier. These are the voyages of the starship Massively, as recorded monthly in Captain's Log by Eliot Lefebvre. Its continuing mission -- to explore strange new game systems in Star Trek Online. To seek out new content and new experiences. To boldly go where many captains may or may not already be going, but they seem to be having fun, right?
In this article: backstory, captains-log, cl, column, columns, cryptic, cryptic-studios, f2p, featured, free-to-play, lore, opinion, patch, patches, perfect-world, perfect-world-entertainment, pwe, sci-fi, season-9, setting, speculation, star-trek, star-trek-mmo, star-trek-online, sto, sto-season-9, story, update, updates
All products recommended by Engadget are selected by our editorial team, independent of our parent company. Some of our stories include affiliate links. If you buy something through one of these links, we may earn an affiliate commission.