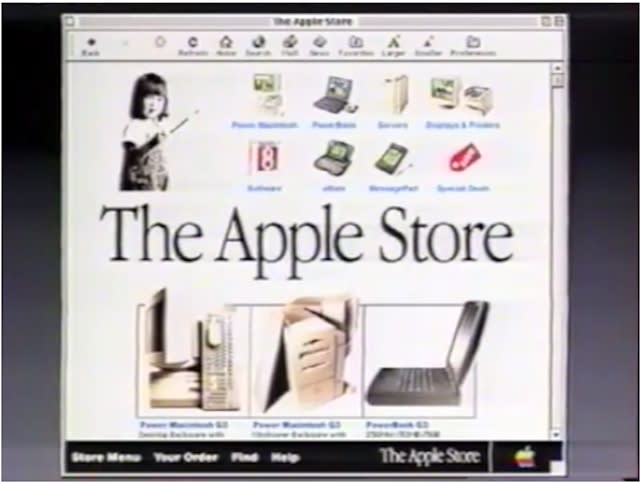 Before Apple retail stores began sprouting up all over the place in the early 2000s, there weren't many ways for users to get their hands on a Mac and give it a proper test drive. Indeed, the shoddy presentation and second-class status afforded to Apple products at stores like Office Max and CompUSA is what prompted Apple's foray into the retail space.

But Apple's insistence on controlling the Apple shopping experience can be traced back even a few years earlier, back to 1997, shortly after Steve Jobs had rejoined the fold following Apple's acquisition of NeXT.

One of Jobs' early initiatives was to transform Apple into a more visible entity in the growing ecommerce space. To that end, Seth Fiegerman of Mashable last week published a fascinating piece charting Apple's early efforts at creating an Apple online store where users could peruse products and order Macs directly to their specifications.

For four months, a team of Apple and former NeXT employees worked around the clock to build a better online store, one that Jobs believed would leap past Dell's. On Nov.10, 1997, Jobs walked on stage for an Apple keynote wearing a button-down shirt and vest, and unveiled the Apple online store for the first time.

"In 1996, Dell pioneered the online store and Dell's online store has become, up till now, the standard of ecommerce sites," Jobs said in his presentation. "We're basically setting a new standard for online ecommerce with this store."

Today, Apple's online retail arm is a revenue generating machine. Though Amazon remains the top dog with respect to ecommerce, Apple in 2013 was the number 2 top ecommerce retailer according to Internet Retailer. Note, though, that in tabulating Apple's ranking, Internet Retailer included revenue generated from hardware, iTunes, and App Store sales.

Fiegerman also details how Apple in the mid-2000s completely revamped the online store's backend. Though the store ostensibly was operating just fine, it wasn't built to accommodate the volume of ecommerce it would soon be hosting on a daily basis.

Throughout 2006 and much of 2007, the engineering team worked to re-architect the online store. These efforts were complicated by the fact that there were actually thousands of online stores at the time - slightly different variations for countries, government bodies, schools. The end result, pushed out in late 2007, was a more Web 2.0 store built on javascript with new features like infinite scroll and interactive galleries to view products.

In this article: apple store
All products recommended by Engadget are selected by our editorial team, independent of our parent company. Some of our stories include affiliate links. If you buy something through one of these links, we may earn an affiliate commission.