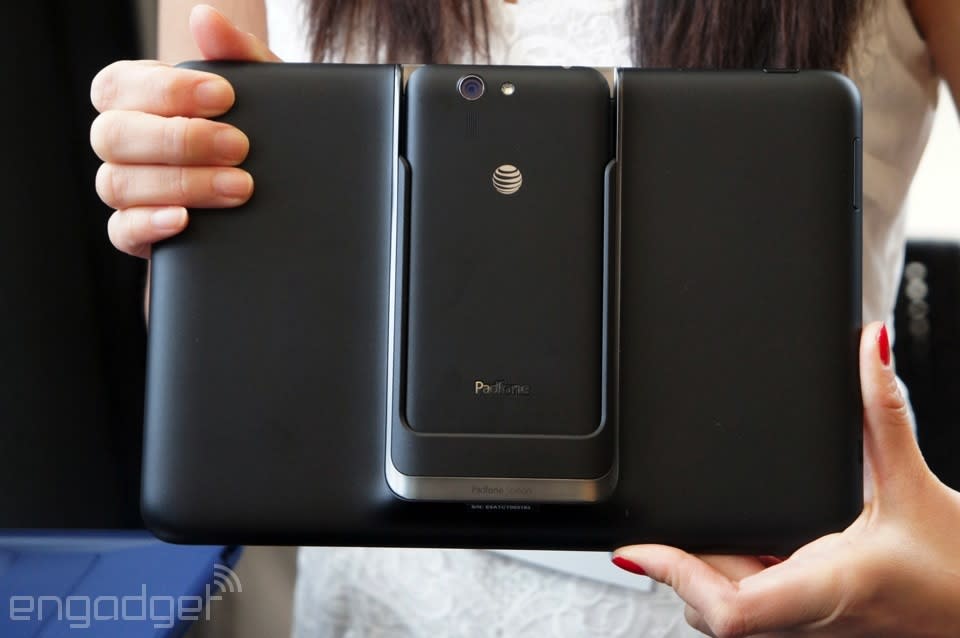 If you're a special sort of person -- I don't know, like a tech writer-- the ASUS PadFone is old news. Since June 2012, Engadget has reviewed three versions of the phone, which comes with a tablet-like dock allowing you to transform it into a big-screen slate. For our American readers, though, it's always been a curiosity -- the sort of thing you could read about, but were unlikely to import all the way from Taiwan. Now you can finally see it for yourselves: AT&T announced earlier today that an American version, the PadFone X, will go on sale June 6th, priced at $199 on-contract. As it happens, I received a loaner unit today at a press event, which means Engadget will have a review up soon, probably closer to the on-sale date. For now, though, I'll regale you with some early impressions of both the 5-inch phone and the 9-inch dock. Come with me if you want to live. I've only had a short time to play with the PadFone X, but so far, at least, it seems much more comfortable to use in its native handset form. The phone, which rocks a 5-inch screen (small by today's standards), is easy to hold. It's not the thinnest handset I've ever held, but it's light and in fact, I think that slight thickness might actually make it easier to grip. The 1080p display is sharp too, and the viewing angles are good enough that I was able to peek at some guy's email from off to the side, even with me sitting a couple feet away (apologies, dude).

Design-wise, the PadFone X has more in common with ASUS' new budget ZenFone line than it does the last-generation PadFone Infinity. The removable back cover is made not out of brushed metal this time, but instead smooth, plain plastic. It's inoffensive, but definitely not as premium as some other flagships you'll find on AT&T's shelf. Clearly, then, your $200 isn't buying design flair so much as specs. Specs and, well, innovation.

Speaking of the sort, let's talk about that tablet dock. The screen itself measures nine inches diagonally, and there's, of course, a phone-sized slot in the back where you slip in the handset. To be clear, the dock is a paperweight without the phone inside; even in tablet mode, the phone's Snapdragon 800 chipset is running the show. By the way, performance throughout feels smooth, as you'd expect with such a top-of-the line processor. ASUS' skinned version of Android KitKat might come as a bit of a surprise, especially to Android purists, but it's hardly the heaviest skin I've seen.

In use, the whole thing feels heavier than your typical tablet, not least because there's a big ol' hump around back where the phone is. That said, the bulge also creates a natural resting spot for your hands, so it's hard to totally knock it when the ergonomics might actually make sense. And the tablet's resolution -- 1,920 x 1,200 -- is fairly sharp for a 9-inch screen. Also, the dock contains its own 4,990mAh battery -- a big improvement over the 2,300mAh cell inside the phone. So even if you find the tablet mode a little unwieldy, the dock is a good accessory to have handy -- you never know when you'll need a spare battery. All told, the two combined should last through 10 hours of video playback, according to an ASUS rep (we'll of course be the judge of that in our full review).

So far, I've covered just what comes in the box: the phone and the tablet dock. There will be some other accessories, though, including a set of folio cases ($80) and a Bluetooth keyboard dock ($99). Some early thoughts: You might want to think hard about the keyboard. Not only is it cramped and flimsy, like a netbook's, but also certain fairly important keys are either hidden or hard to reach. Both the quotation mark and apostrophe, for instance, require you to hit a special Function key, as opposed to the usual left Shift button. As such, typing on it doesn't feel natural. (Here's a mental image for you: an old colleague, a tech editor, at the AP, peering over my shoulder, trying to no avail to help me find the apostrophe.) If I were you, I'd look into other Bluetooth keyboards before buying ASUS'. Everything else, though (the tablet, dock) has a little more promise. More on that in our full review, of course.

In this article: asus, atandt, att, hands-on, mobilepostcross, padfone, padfonex
All products recommended by Engadget are selected by our editorial team, independent of our parent company. Some of our stories include affiliate links. If you buy something through one of these links, we may earn an affiliate commission.