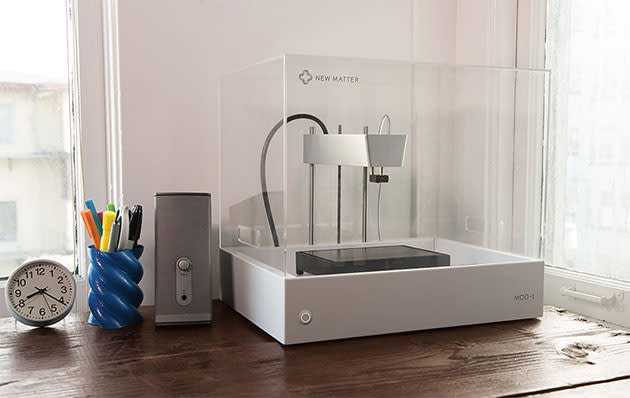 Affordable desktop 3D printing is imminent, and today another option began its crowdfunding campaign. The folks at New Matter are looking to simplify the process so that anyone can output the items they desire, and to do so they've built the MOD-t. Aside from the clear enclosure for easy viewing and dapper industrial design, the software component is where the ease of use really shines. The outfit worked alongside Frog to develop a user interface that allows for quick design downloads, applying tweaks like you would a photo filter, easily sharing with friends and beaming projects to the minimally-designed printer. "At the end of the day, we wanted to be a 3D printing experience that is meaningful to the way that you currently approach communicating with the people in your life. Create relationships, not just objects," says Frog designer Christine Todorovich.

If you're in need of a quick introduction, Frog has worked with GE, Microsoft, Nike and other Fortune 500 companies on the strategy and design for both products and software -- including Sharp's Feel UX for Android. The firm not only collaborated on the ecosystem and software for the MOD-t, it also helped tweak the overall design of the unit right down to the mechanics. Those came from New Matter's Steve Schell, who engineered the 2-axis motion tech to use a third less parts than other 3D printers with moving platforms. And fewer parts keeps the cost down. If you recall, the Mirco is a $300 option that also takes up less space at a workstation, but offers a bit smaller print size. New Matter and Frog are banking on the experience here, which allows for artists and designers to sell their 3D-printable wares through the same online repository -- similar to Makerbot's Thingiverse, but with the added e-commerce. The MOD-t also features WiFi connectivity, which is a feature that has yet to become standard on these output gadgets. What's more, Frog is getting into the venture capital game, and this is the first effort from its Venture Design arm. In this article: 3dprinter, 3dprinting, frog, frogdesign, mod-t, newmatter, newmattermod-t
All products recommended by Engadget are selected by our editorial team, independent of our parent company. Some of our stories include affiliate links. If you buy something through one of these links, we may earn an affiliate commission.