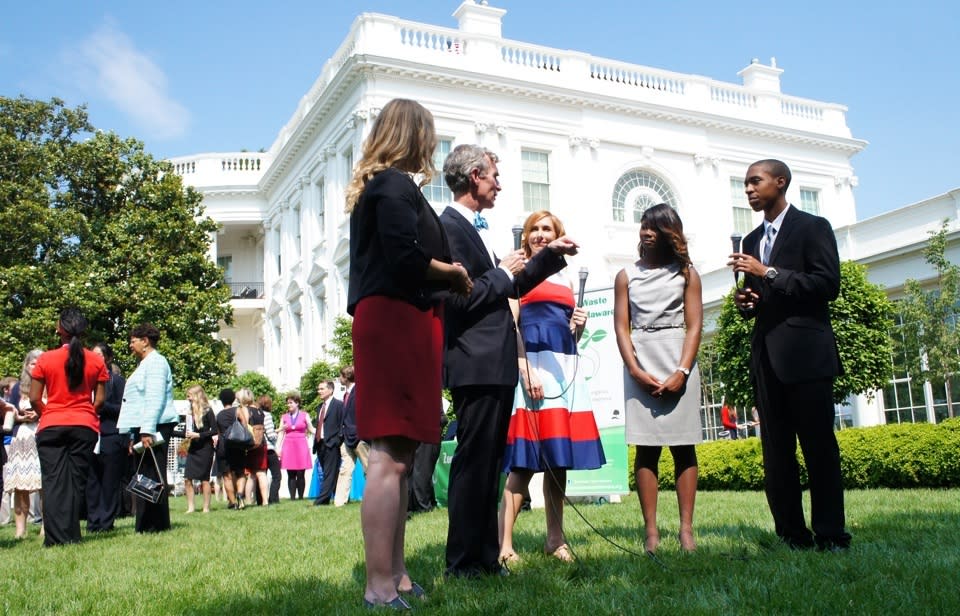 The annual White House Science Fair is, above all else, an amazing public relations play. President Barack Obama hangs out with a few dozen of America's brightest students who show off their latest work and get celebrated for it. Everyone wins, right?

In this instance, yes: everyone wins. Regardless of the good publicity, the annual White House gathering -- now in its fourth year -- is one of the few events we attend that's completely genuine. It's hard to keep up a facade of bullshit when brilliant, driven, passionate kids are literally surrounding you with their accomplishments.

There were too many smart kids with neat projects for us to cover everything. And Obama's dog, Bo, was running around, so you'll forgive me for getting distracted. Dogs, right? Here are a few standouts among the standouts: Deidre Carillo's project is an electric kit car that she drives. Carillo, 18, is part of the team that built the project, and she's also its pilot. She's pretty good at both, as not only is her team's car, Dragon 1, a formidable competitor, but she also took home first place in this year's Emerald Coast Electrathon. Her team's car was created from a Blue Sky Design kit, though as you can see above, it got plenty of custom work. In the next room, what looked like a miniature, futuristic wrecking ball was attached to a machine resembling the Mars Curiosity rover. Rather than a destruction vehicle for Martian structures, the rover is a remarkably easy-to-use rescue tool. How easy to use? So easy, I could pilot it. Heck, it uses a Logitech game controller for operation. Pretty easy! The idea is that the wrecking ball end -- a ball with waterproof lights and two cameras -- can be lowered into iced-over waters to assist with search-and-rescue missions. Rather than sending human divers into dangerous conditions, the 120-pound device can be remotely operated. More than just a science project, the Natick, Massachusetts-based team is working on patenting and licensing the tech.

Outside, while Bill Nye ("The Science Guy") and Mythbusters' Kari Byron goofed with student attendees on the White House livestream, 20-year-old Parker Owen represented Alabama by barely breaking a sweat while presenting his project: an amazing prosthetic leg made solely from bicycle parts.

Owen got the idea when speaking with a family friend who raises funds for prosthetic limb donations in Honduras. When Owen found out how much money each leg cost (around $2,500 apiece), he began work on a cheaper solution that could be made from materials found in developing nations. Rather than looking to natural resources, Owen looked to bicycles -- a resource found in even the poorest countries. He got the cost of manufacturing down to just $30 per leg.

Obama's speech was the only element that rang hollow at the fair. He related a few stories from his own dalliances with science fairs in his youth; he celebrated a few of the participating students by name; and he announced a few new initiatives in his administration's STEM (Science, Technology, Engineering and Mathematics) program. His speech, sadly, was nowhere near as passionate and impressive as the students themselves.

Of course, the White House Science Fair isn't really about Obama. It's about the kids. As he said himself, "I want to make sure that every young person across America knows what their peers are doing to inspire even more work in science." In that sense, mission accomplished.

In this article: barackobama, presidentobama, sciencefair, whitehouse, whitehousesciencefair
All products recommended by Engadget are selected by our editorial team, independent of our parent company. Some of our stories include affiliate links. If you buy something through one of these links, we may earn an affiliate commission.