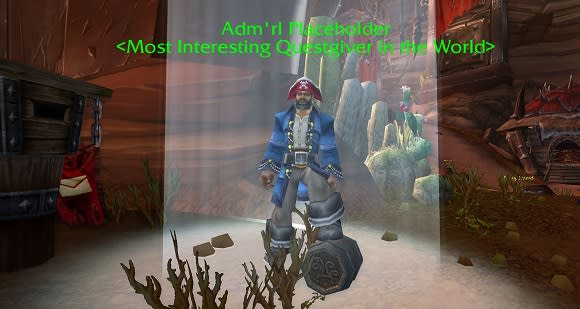 The Placeholder name has a storied place in WoW's history. Long ago in the original beta, an NPC named Captain Placeholder teleported players from Menethil Harbor to Auberdine before the transport ships had been created. He triumphantly returned to live realms for a time after a bug broke the ships. Years later, he showed up in the Cataclysm beta as Cap'n Placeholder, though he served no purpose and never appeared in the release version of the expansion. An NPC conversation in Menethil harbor spoke of him as an Alliance hero, stating "Nobody could hold a place like him. Nobody."

In the Mists beta, a newly promoted Adm'rl Placeholder once again saved the day. He transported players from Orgrimmar and Stormwind to the Valley of the Four Winds while the Jade Forest zone was closed for remodeling.

Is Placeholder the famous captain's sword? What item will it become? Why is it marked as junk? Why does it stack to 20, and what "reward not yet complete" will eventually find its way into our backpacks? A future patch will reveal all! Until then, hold a place in your heart for this amazing sword.