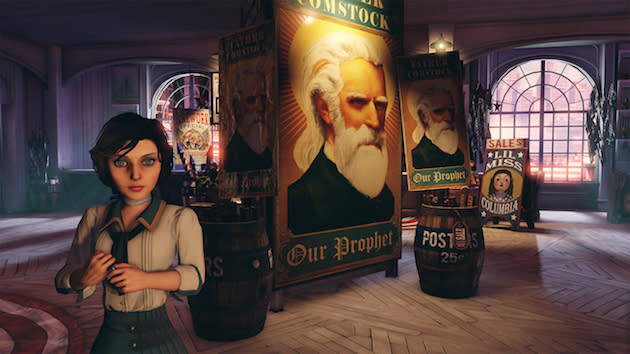 The news that BioShock and BioShock Infinite developer Irrational Games was winding down was a punch to the gut for many last year, but it turns out there is a bit of silver lining. The franchise will live on with developer 2K Marin, the studio that handled BioShock 2, according to GameSpot. Someone at the Cowen and Company analyst conference apparently made a remark that the BioShock series hadn't quite reached its commercial potential yet, and Take-Two Interactive head Strauss Zelnick agreed, saying that the NorCal team would be responsible for its "shepherding going forward." BioShock 2 did pretty okay critically and commercially, but many (including myself) felt its tour through Rapture was little more than a retread and that it lacked the first game's magic. With how Infinite ended, it's anyone's guess where the series' fiction could wind up next.

The rest of the event was fairly interesting, too -- especially if you want a look inside how the publisher does business. Zelnick said that because it doesn't flood the market with unwanted sequels, the publisher has a chance to focus more on higher quality games.

"The risk of just [releasing more games] is that you end up just bulking up your release schedule and that isn't really what consumers want. Consumers want better, not more," Zelnick said.

He also cited "permanent franchises" like Grand Theft Auto and Borderlands as being examples of this, with a hint that Red Dead Redemption could be one, as well. Considering that developer Rockstar Games (which Take-Two Interactive owns) doesn't typically do much in terms of E3 announcements, we'll likely have to wait a little longer before any more info about a new open-world Western surfaces.
In this article: 2kmarin, bioshock, bioshock-2, BioshockInfinite, gaming, hd, hdpostcross, RedDeadRedemption, Strauss-Zelnick
All products recommended by Engadget are selected by our editorial team, independent of our parent company. Some of our stories include affiliate links. If you buy something through one of these links, we may earn an affiliate commission.