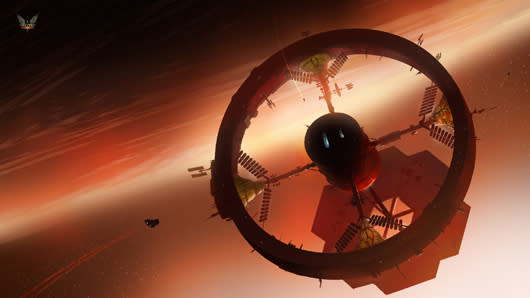 Frontier is adding more than 10,000 players to Elite: Dangerous today via the crowdfunded sci-fi sandbox's premium beta launch. The firm is also featuring three user-generated gameplay videos showing of ED's heat mechanics, super-cruise, and voice control. You can view those, as well as read the full press release, after the cut.

The Premium Beta phase starts today with all the major features that have been added through the four Alpha phases. The immediate focus is on testing the systems and servers with a step change in numbers using a re-balanced game based on feedback and information from the recent Alpha 4 build.
More than 10,000 additional people, a number which is growing daily, are today able to earn credits to upgrade their ships and weapons by blazing their own trading, piracy and bounty hunting trail though five star systems covering a 200 cubic light year volume of space. There are a range of different economies and governments, ranging from Anarchy to Federal Democracies to Corporate-run systems.

All this action takes place around ten stars in five star systems that make up part of the Boötes constellation (when viewed from Earth) and set within the 400 billion star systems of the Elite: Dangerous Milky Way galaxy.

David Braben, CEO of Frontier, said: "The start of the Premium Beta phase is another exciting moment in our development – from today we have over 10,000 additional people playing the game. This is a significant and sensible step-change with which to test the next level of scaling of our cloud-based systems and servers as we move towards the very large numbers of people we will eventually have playing.

I once again would like to thank all those who played such an important role in the Alpha phase, which is now at an end. We're looking forward to continuing to collaborate with the expanded community during the beta phase as we deliver greater scale, richer content and ever higher quality."

In this article: beta, dangerous, david-braben, elite, elite-beta, elite-dangerous, elite-premium-beta, elite-video, frontier, frontier-developments, internet-spaceship, kickstarter, sandbox, sci-fi, space, spaceships, video
All products recommended by Engadget are selected by our editorial team, independent of our parent company. Some of our stories include affiliate links. If you buy something through one of these links, we may earn an affiliate commission.