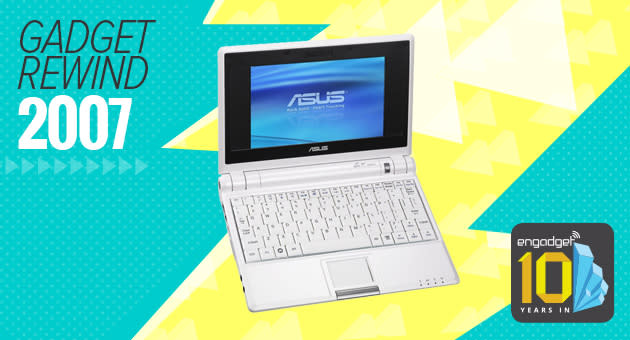 The ASUS Eee PC was launched in 2007 and while it had all the characteristics of a "netbook," it arrived before the term had wormed its way into popular vocabulary. This species of compact computer -- essentially miniaturized, internet-focused laptops -- took the market by storm in the late 2000's, but failed to have much staying power and ultimately faded from view. At the time, these stripped-down portables from Taiwan-based ASUS, filled a growing niche for people on the go. They offered just the essentials, while still managing to provide a surprisingly good bang-for-buck ratio. The Eee PC was aimed at users who rarely stepped beyond the bounds of basic web surfing and email, so it was easy for ASUS to trim the fat and offer a small, lightweight device. In fact, that undemanding demographic was the inspiration for its titular triple E's: "Easy to learn, Easy to work and Easy to play."

Beyond simplicity, the Eee PC's portability and price were the keys to making it desirable. The 7-inch, 800 x 480 screen and two-pound weight made it far easier to cram in a bag or oversized pocket than its hefty, full-sized notebook counterparts. However, the cramped keyboard was definitely not built with large-pawed users in mind. Three models arrived in the first wave of Eee PCs, covering a variety of price points. The Eee PC 4G (701) landed squarely in the middle of the group, all of which ranged in price from $300 to $500 -- sadly the rumored $200 model never surfaced. And before you get confused, the 4G stood for its 4GB SSD rather than mobile connectivity (2GB and 8GB versions were also in the lineup). To help offset the relatively skimpy drive sizes, ASUS bundled in 10GB of free cloud-based Eee Storage for the first year and a half.

As tablets, lightweight Ultrabooks and high-functioning smartphones arrived on the market, the Eee PC and other netbooks eventually faded from view, but ASUS still had weight and portability on the menu. Between its keyboard-packing Transformer Pad tablet series and the super-slim Zenbook line, the company managed to tackle two divergent formats, yet still provide quality specs in light, portable packages. Today, for those who still want that laptop experience, but don't need all the expensive extras, the growing selection of Chromebooks definitely fits the bill and even manages to deliver on that $200 promise.

Did you own an ASUS Eee PC 4G? Add it to your Engadget profile as a device you had (or still have) and join the discussion to reminisce or share photos of your device with other like-minded gadget fans.
In this article: 10yearsin, asus, asus eee pc, asus eee pc 4g, gadget rewind, gadgetrewind, gear, mobile, mobilepostcross, netbook, personal computing, personalcomputing, transformer pad, zenbook
All products recommended by Engadget are selected by our editorial team, independent of our parent company. Some of our stories include affiliate links. If you buy something through one of these links, we may earn an affiliate commission.