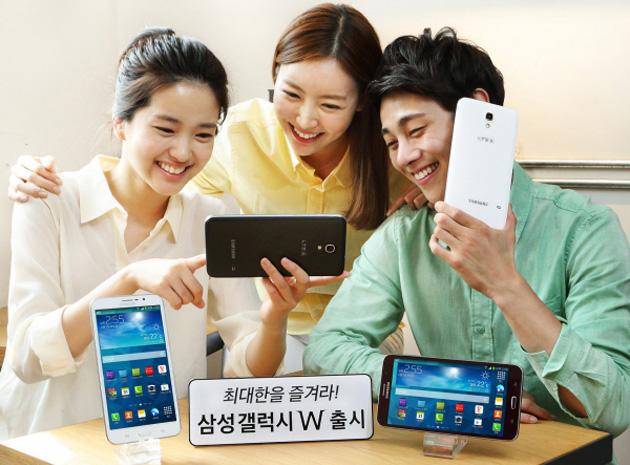 If you thought that big devices like the Galaxy Mega 6.3 were already blurring the distinctions between phones and tablets, hold on to your hat -- Samsung has just erased those distinctions altogether. Its new Galaxy W (not to be confused with the 2011-era W) blends the 7-inch screen of a small tablet with a relatively compact design that lets you hold it one-handed for phone calls. This isn't the first crossover we've seen by any means, but it promises to be more comfortable than truly finger-straining rivals like ASUS' Fonepad 7 or HP's 7-inch VoiceTab.

As with the Mega, this isn't the flagship you might expect given the gigantic dimensions. You'll be making do with a 720p display, a 1.2GHz quad-core processor, 16GB of expandable storage, a 8-megapixel rear camera and a 2-megapixel front cam. The W is even stuck on Android 4.3 rather than 4.4. It won't be the cheapest device, either, as it's selling for 499,400 won ($489) off-contract in its native Korea -- Samsung is no doubt expecting customers to treat this as a two-in-one purchase. There's no mention of an American launch, but you shouldn't count on one when US carriers have so far been skittish about offering category-defying hardware.

In this article: android, galaxyw, korea, mobilepostcross, phablet, samsung, sktelecom, smartphone, tablet
All products recommended by Engadget are selected by our editorial team, independent of our parent company. Some of our stories include affiliate links. If you buy something through one of these links, we may earn an affiliate commission.