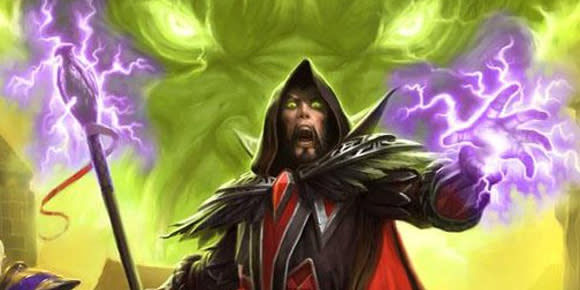 Why do I want to see Medivh in Warlords? More importantly, how could I get to see Medivh in Warlords? Well, there's several ways this could happen. First off, we'd have to ask ourselves which Medivh would we even get to see - if there's an alternate Draenor with an Iron Horde that wants to invade our Azeroth, then by definition there's an alternate Azeroth that's going without its usual serving of orc invasion. And on that Azeroth there should be a Medivh - the guy who in our timeline built the Dark Portal and shared with Gul'dan the secret to creating one. And that Medivh should still contain within him the essence of Sargeras, the great big baddie above all others, the guy who signs Kil'jaeden's checks.

So I'd like to see what that Medivh is up to. Is he wondering where that army of orcs he was expecting had gotten off to? It's possible that he simply has no idea what Kil'jaeden was up to - Medivh originally discovered Gul'dan while searching the universe for a means to destroy humanity, as he believed (thanks to the presence of Sargeras in his mind) that doing so would help him learn mystical knowledge more effectively. In our timeline, he found Gul'dan after the Horde had destroyed the draenei and conquered their world, and were now finding themselves in a world poisoned by the fel energies they'd unleashed to earn their victory.

None of that is true in the Draenor we're about to visit, and so it's quite possible that the Medivh of that Azeroth hasn't discovered the world yet. Gul'dan's Horde doesn't exist there, and the Iron Horde hasn't yet conquered - this would leave Medivh still restlessly searching the cosmos for the means to commit genocide on his own people. Paradoxically, then, he might well be drawn to the new Dark Portal being created by the Iron Horde in the Tanaan Jungle (visible on this map). He would probably be curious as to how the orcs developed his Dark Portal, and even more curious as to where theirs went - the future-invading portal of the Iron Horde would be a magic he would understand, dwelling as he did in Karazhan, itself unmoored in time.

Indeed, what if this Medivh successfully grasped the time magics Kairoz used to bridge this new Draenor and our Azeroth? With Karazhan as his home base, he has to hand a source of temporal might - imagine, if you will, a Sargeras-possessed Medivh with the power to pick through all of history for a means to annihilate his own people? And why would he want to stop there? Once he kills humankind, he's going to have to take out the dwarves and high elves - there's no way they would leave him unmolested. With the power to travel to new timelines, Medivh could well become an unstoppable menace.

But first he'd need to discover how. By transporting himself to Draenor, he could begin a subtle game, manipulating the Alliance and Horde -- perhaps through a contest of wills with our timeline's Khadgar, the older and wiser version of his apprentice. Or, perhaps, through a battle of wills with someone else entirely.

In our timeline, after being freed from Sargeras' corruption, Medivh helped rally the Horde and Alliance forces to battle against the Burning Legion, then departed entirely. Where did he go? And more importantly, if another Medivh, one who still possessed the evil of Sargeras, becomes a threat to not just one but all timelines who better to stand against him than another Medivh? Our Medivh? It's one thing to leave the mortal races to their own destiny, but in order to do so, Medivh may well be forced to return and remove the specter of Medivh once and for all by preventing himself from ever gaining that unholy mastery over time.

Either way, I'd love to see Medivh.

In this article: Draenor, Lore, Medivh, warlords-of-draenor, Who-I-Want-To-See
All products recommended by Engadget are selected by our editorial team, independent of our parent company. Some of our stories include affiliate links. If you buy something through one of these links, we may earn an affiliate commission.