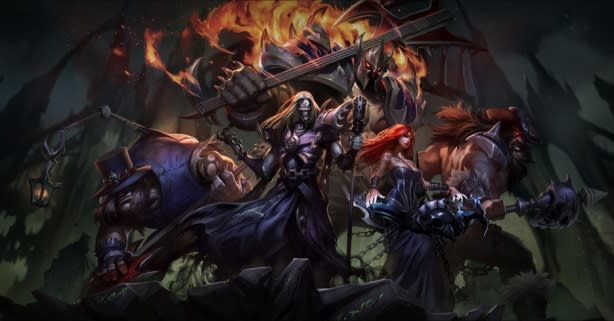 Proving that you don't need to be real to earn real success, the debut album from Pentakill, a band made up of five League of Legends characters, is currently sitting at number one on the iTunes metal charts.

Look, we'd be clever and throw in a pun or two here, but this news really speaks for itself, don't you think? A real album from a fake band made up of not one, not two, but three undead - one of whom is undead because the guitarist shred so *bleep*ing hard on his axe that he went berserk and killed him - is sitting at the top of iTunes. What more can be said at that point? Here, just read the lore behind the band's legendary guitar:

"Both made of metal and made for metal, Numero Uno was known as the indestructible axe, a tool Mordekaiser hoped would withstand his beastly playing. Finally, after years of searching, he found it buried deep within a Shuriman crypt. But as Mordekaiser grasped the instrument's neck for the first time, it too grasped him, filling him with murderous intent and driving his headbanging instincts harder and heavier than they'd ever been before." So yeah, Pentakill is basically gaming's GWAR. Or Dethklok, if you prefer.

The album features eight tracks, most of which are named after in-game items. Even the album's title, "Smite and Ignite," references two spells that players can cast in the game. You can download it for $6 via iTunes, or get an mp3 version for free direct from Riot Games.

Party on, Vayne. Party on, Karthus.

[Image: Riot Games]
In this article: itunes, league-of-legends, metal, music, pentakill, riot-games, seriously, smite-and-ignite
All products recommended by Engadget are selected by our editorial team, independent of our parent company. Some of our stories include affiliate links. If you buy something through one of these links, we may earn an affiliate commission.