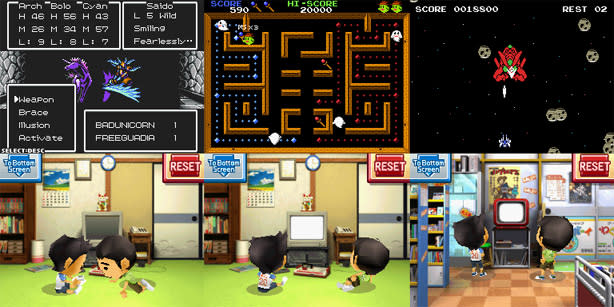 Like its officially localized predecessor, Retro Game Challenge 2 features a quest that takes players back to the 8-bit era, where they must complete difficult challenges across several included games while scouring faux gaming magazines for hints and cheats. While the original game featured simple action games and straightforward challenges, Retro Game Challenge 2 includes multiple text-based adventure games, making the Japanese version a difficult playthrough for players who are unable to read the language.

Though Retro Game Challenge met with acclaim from players stateside, publisher Xseed declined to translate and release its sequel in North America, citing low sales of the original game. Instructions for applying the Retro Game Challenge 2 patch are available at the translation team's website.

[Image: Indieszero / RGC2 Translation Team]
In this article: ds, fan-translation, game-center-cx-2, indieszero, nintendo, retro-game-challenge, retro-game-challenge-2, translation
All products recommended by Engadget are selected by our editorial team, independent of our parent company. Some of our stories include affiliate links. If you buy something through one of these links, we may earn an affiliate commission.